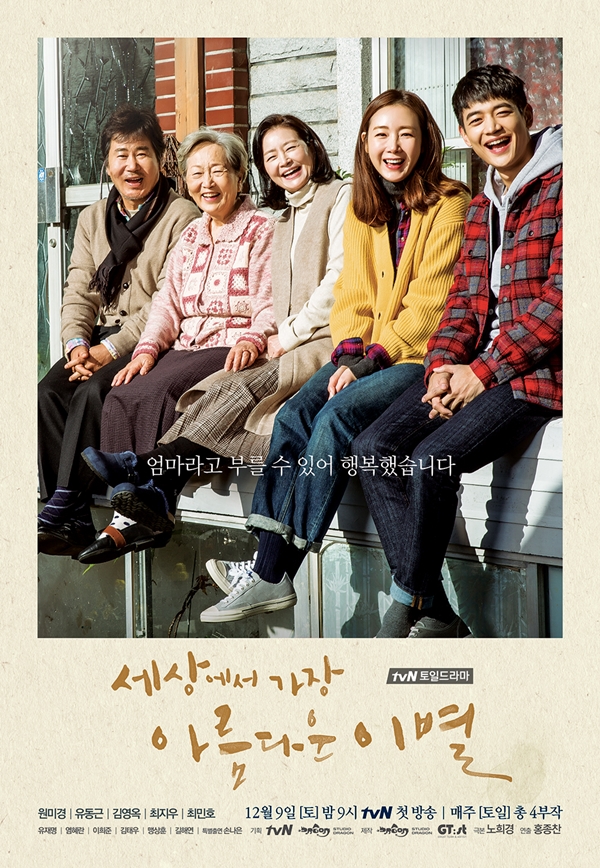 An ordinary middle-aged woman (Won Mi-Kyung) has devoted her life to her family. She is diagnosed with terminal cancer and must prepare her goodbye to her family.

Man Feb 14 2019 4:57 am Never thought that I would watch it before. But then when I give it a try, I couldn't stop crying. This drama will tell and teach you a lot about love, in a way that will make your heart break, but then realize how love should have been truly conveyed.

JAS Aug 14 2018 8:06 pm I just finished it!! Actually I was like im a strong person i wont cry, but i failed its so touching and remind us to do better to our parents. Also i liked all their acting especially choi ji woo and the mother also minho crying scenes were so touching, to be honest I liked all the acting ??. I recommend it so much.

jimin's hair Mar 11 2018 8:31 pm i really recommended this drama. its just 4 episodes but i cried in every scene. the story is beautiful, the actors are great. eomma saranghaeee T.T

Katey Perey Dec 18 2017 2:35 am Actually im watching it without english sub but this drama was so good from story, background music, korean ost especially with the cast, at first when i heard Minho's is part of this drama i have doubt towards his acting although he was quiet good in web drama Somehow 18, But when i watch the clip videos His acting was really improved a lot and now im looking forward for his future works i did not expect with his acting performance on this drama.

Ngs Dec 09 2017 9:56 am I bet soen of people said this drama concept is so cliche.. But, this kind of drama is really important in this kind of world to remind us again and again. We often take it for granted our mother presence, We thought she will always be there, we often find ohr mother annoying, and sometines rude..... Ahhh really want to hug my mother right now

Ammy Dec 08 2017 1:59 am I'm all set to cry a river or maybe my house is going to get flooded... but sometimes these slice-of-life dramas are essential

ixxdhx Dec 04 2017 7:15 pm Watched the script reading on youtube. All the actors and actress all had their tears. This one really will be a tear jerking drama.. Prepare your tissue pals!!

DiJay Nov 03 2017 2:41 am Wow! No Hee-Kyung is the writer? Then I am definitely in! I've watched 4 of her dramas and I loved it- It's Okay That's Love, Padam Padam, Dear My Friends, and That Winter the Wind Blows. Then Choi Ji-Woo is here????? OMG this is gonna be so good. Can't wait for this drama to air.

Dadada Oct 23 2017 8:58 pm Cool. Minho and Choi Ji Woo are going to be SIBLINGS on this drama. Theyre like the black sheep of the family. Choi Ji Woo is the queen of Melodrama.. This would be so gooooood