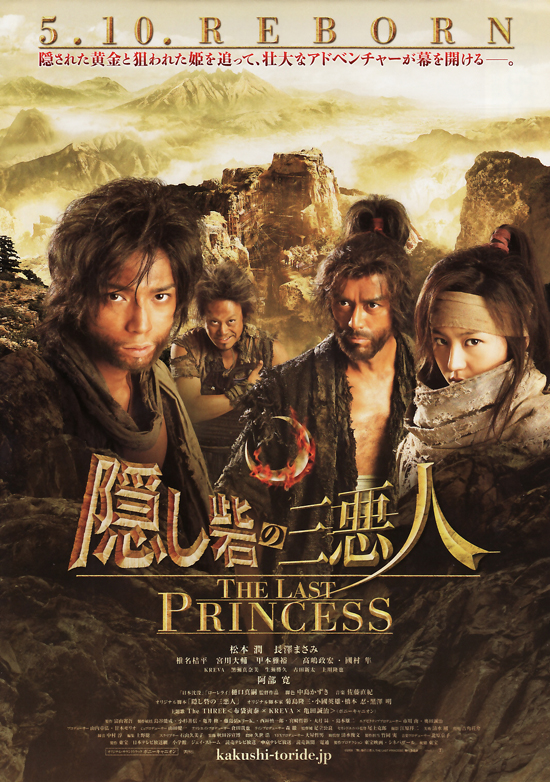 Makabe Rokurota (Hiroshi Abe), a loyal retainer of Princess Yuki-hime (Masami Nagasawa), has been commissioned to transport Yuki-hime and Akizuki's ample treasury of gold bars safely to the politically stable Hayakawa. They disguise themselves as humble firewood peddlers, hiding the gold bars inside the logs they are carrying so as to pass safely through roadblocks set up by Yamana, which is under the control of Takayama Gyobu (Kippei Shiina), whose attire bears a striking resemblance to that of Darth Vader.

Along the way, Rokurota comes across Takezo (Jun Matsumoto) and Shimpachi (Daisuke Miyagawa), who have escaped from forced labor in a gold mine. Takezo and Shimpachi first frown on joining the journey, but eventually agree to help out in the hope of escaping Yamana's oppression and cashing in on the gold reward Rokurota offers them.

Matsujun Daisuki Mar 14 2009 5:28 pm But im really luking forward to the movie X3 MatsuJun is playing such a different character! It will definitely be interesting to watch <3

Matsujun Daisuki Mar 14 2009 5:24 pm I don't like the pairing! Masami luks kinda old and MatsuJun had a babyish cute face...so i dont think they luk good together! Jun luks best with Inoue Mao! Maojun 4ever <333