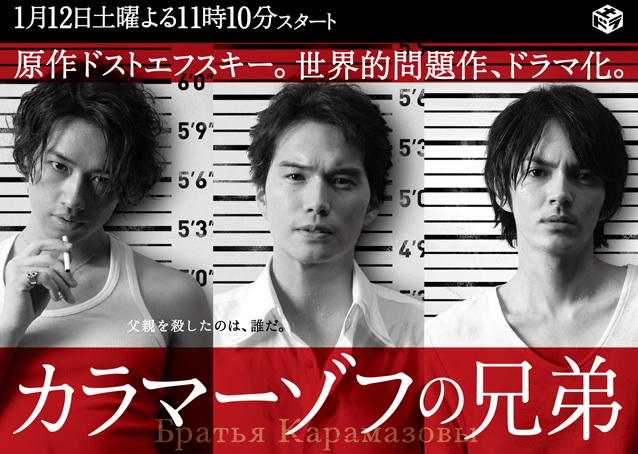 Set in present day Japan in a provincial town, Bunzo Kurosawa, a greedy and violent father, is murdered in his own home. Bunzo has 3 sons: oldest son Mitsuru (Takumi Saito), second son Isao (Hayato Ichihara) and youngest son Ryo (Kento Hayashi). The three sons are suspected of murdering their own father.

Sara Jun 02 2019 6:06 am Definitely one of my fav dramas ever <3 with the best actors... Started reading The book after the drama and am beyond excited

Igor Mikuya Sep 02 2015 9:13 am Very good adaptation of book, I liked brothers and ending more here than in the original. Books have more space for portraying different things and make it even deeper, but this drama although episodes was quite short did a great job to be alternative version of Karamazov's story. Finally what is worth to mention - very surprising choice of music: Nirvana, Rolling Stones, Pink Floyd, etc. Feast for the ears.

Jay Quintana Nov 20 2014 3:22 am Great series. Even though I read the book, I forgot most of it, so I'm not sure how true to the book the series is. (I don't recall the detective playing such a big role in the book.) Nonetheless, the acting, direction, sound, and cinematography are top notch.

nhimura Aug 23 2013 10:49 am Crazy! Every single episode gives me creeps. the freakin-scary-looking doll that always showed up at the beginning, the creepy house, Bunzo's enormous picture at the hall (i want to punch his face so bad), and the background music, all of them successfully create the dark impression for this drama. They keep us wondering who's the real murderer. The actors are great! Yoshida-san is terrific! I might never forget the Bunzo's character he portrays. really annoying old man. Kento really fits for the little Ryo. He looks fragile so that i want to hug him so much. I never ever doubted Hayato's acting skill. He always great! And for Takumi, now he got my fully attention. gorgeous!