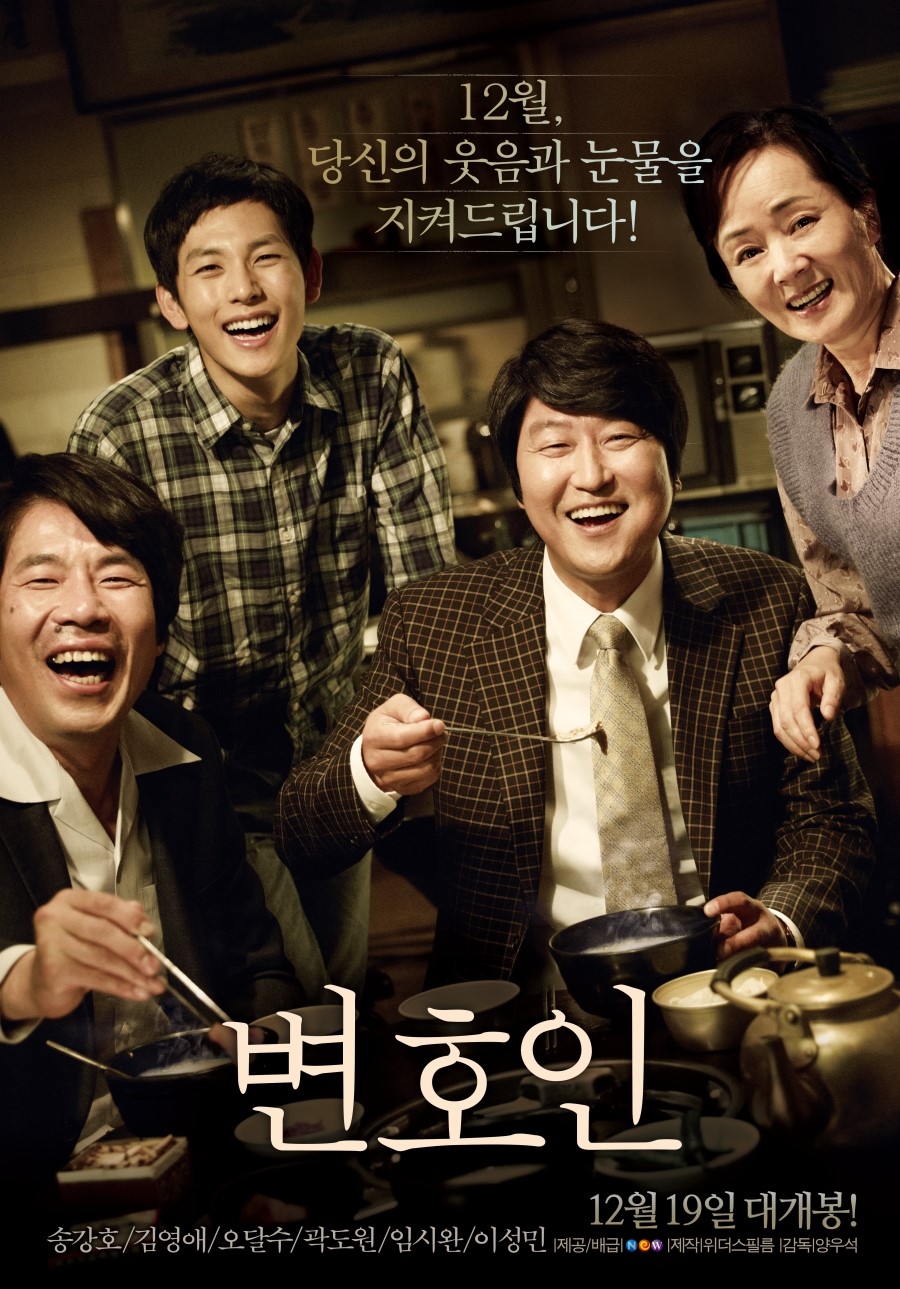 Song Woo-Seok (Song Kang-Ho) graduated from high school and eventually passed the bar. He is now an attorney in Busan specializing in tax law. The only reason that he became an attorney is for the money. Unlike other attorneys around him, he hands out his business card to pick up clients.

One day, his views are changed by student activist Jin-Woo (Im Si-Wan). Because of this, Jin-Woo is brutally tortured and put on trial. Song Woo-Seok decides to defend Jin-Woo as his client. JCannon Oct 03 2019 2:08 pm "WakeUpKoreaboos" comment is ignorant, racist and WRONG! Retrials starting in 2014 exonerated these guys who have been wrongfully imprisoned for 32+ years!

The Burim case refers to an incident in which the government of former president Chun Doo-hwan arrested and tried 19 students and office workers from Sep. to Oct. 1981 who were studying social science books. The case was part of efforts to crush an incipient democratization movement in the Busan area."

“At the time, the police arrested the suspects illegally without a warrant and coerced them into confessing,” the court ruled in regard to charges of violating the National Security Law.The court also found the defendants not guilty of violating the Martial Law Act. “The defendants did violate sections of the Martial Law Act,” the court ruled, “but this was justifiable since it was intended to check and oppose the criminal activity of the military regime of Chun Doo-hwan, who seized power through a coup d’etat on Dec. 12, 1979 and through the Gwangju massacre on May 18, 1980.”

Ko and the other four defendants applied for an additional retrial in Aug. 2012 and were acquitted of all charges. With five of the victims in the Burim trial completely exonerated in the retrial on Thursday, it is likely that the other fourteen defendants will also apply for a retrial of charges of violating the National Security Law.

Jashik May 07 2017 7:04 am @SingyourSong.DanceyourDance. maybe it's too late to reply but at least i try The meaning of that sentence is "Today, 99 of 142 attorney from Busan attend (the trial to defend song woo seok)"

I probably didn't write it correctly but that's what I could make out. Can someone tell me?

The last scene Nov 07 2016 2:26 pm So it seems that some people are puzzled by the last scene where the names were called.

I guess the subtitle sucked but if you can understand Korean or know modern history of Korea then it's quite easy to understand.

The main character in the movie basically depicts Korea's ex-president Roh Mu Hyun. The president was a lawyer busy raking money by working as a tax law specialist who then turned into an attorney working for human rights. (The case in the movie actually happened and it's called Burim Case in Korea)

Anyway, in 1987 Roh attended a labour worker's funeral which made him to be arrested for violating "Limiting intervention of 3rd person" stated in labour law. The movie seems to talk about some other event (but probably got arrested under the same violation) that arrested him. In real life, 99 lawyers volunteered to defend Roh in his trial and that is the part where the movie gave goosebumps to those who know the story.

Apparently, the movie is most well understood to those who know the actual background story. Hence it may not be the best movie for foreigners. And yes. Burim Case actually involved the book "What is History?" by E. H. Carr. The government of Korea claimed the book defended socialism/communism and further claimed that E. H. Carr is a Russian when in fact he is a British.

But we all know how corrupt administrations handle these things...

JL Nov 06 2016 9:15 pm For all of you who didn't like ending, I want to say it is quite intentional that the director finished the movie just like that. In the real life, it was just recent that the innocent students found innocent. And I believe this movie gave a lot of support and help for these students to achieve that result.

This is the great movie.

suny May 16 2016 7:37 pm I really don't understand why they ignore some serious lines like .. what happens to the student's are they found guilty ! and what happens to him woo seok ! I think the start was waste of time and when the real story begin toward the end the movie just ended without any closer ... I don't like it ....

Kiyomi Mar 09 2016 1:53 am I could not believe that was Siwan as JinWoo. His character had to endure the worse kind of human treatment! I was in utter shock. He did a awesome job. I was amazed! Song Kang Ho as The Attorney Woo Seok did not disappoint either. Wow! Bravo! Bravo!

Wake up Koreaboos Aug 19 2015 5:53 pm This is based on a real story of ex-president of Korea. This person who made this movie is shifty as f. He had release this movie on the same month as the election in 2013. He had released this then to give advantage to 야당. And the student here in the movie was later found guilty of actually being communist. In the movie, he is portrayed as being innocent. This is Korea at its best. Corrupt country. A effd up place where celebrities fears the netizens the most and netizens posts hurtful comments everyday in order to hurt people. Netizens who are too pussy to even say that in real life but still posts those comments online. A society where people have no respect towards authority, especially when it comes to government.

This is korea people. You guys might think that Korea is some kind of paradise where everyone looks like song minho or zo insung.

Gioan Jan 09 2015 6:00 pm Great ending! But was I the only one expecting the judge to read out the main characters name at the end, for him to be the final one to stand up and say "Here!"?

Trang Dec 03 2014 3:12 pm "This December, keep your smile and your tears". The slogan in the poster alone makes me curious to see this movie and it's worth every minute, every smile and every tears I spends on it. The whole movie is so meaningful and to me the final scene is an piece of art. Every actors has done their best in the movie, Siwan as an idol surprised me with his acting skill. This movie is a excellent movie. In response to Chris, the ending scene is about how supported the attorney is in his case. He was disrespected and looked down on before, but because of his courage to take on a case that everyone scared, people changed their mind about him. It's also about the change in the Korean mind, where the government was dominated before, now the power is in their hands. Sorry for my bad English and hope you understand.

cao May 08 2014 12:36 am In response to Chris: The puzzling ending is indicating how many lawyers were supportive of of the main character. To some extent, you could see how alone the young prosecutor was at that moment and if I were him, I would wonder whether I was doing the right thing. For the purpose of the movie, it shows that at that point (several years after the trial of student activists), South Korea has become something different - that the voice for civil rights has become more common and the voice of the power has been weakened. That is my reading of the ending.

Chris Feb 17 2014 6:12 pm Very powerful movie. It was sad to see human treating each other like this, but in the transformation of the main character from someone just looking to get rich to a passionate advocate and social reformer gave plenty of room for hope. But I didn't understand the final scene (I don't think this is a spoiler) where they were reciting names at the trial. What did that mean? Except for that puzzling ending I really thought this film was great.

Siwan? Jan 13 2014 8:42 pm Looks like Siwan is getting more and more serious with his acting career. I might give this a shot.