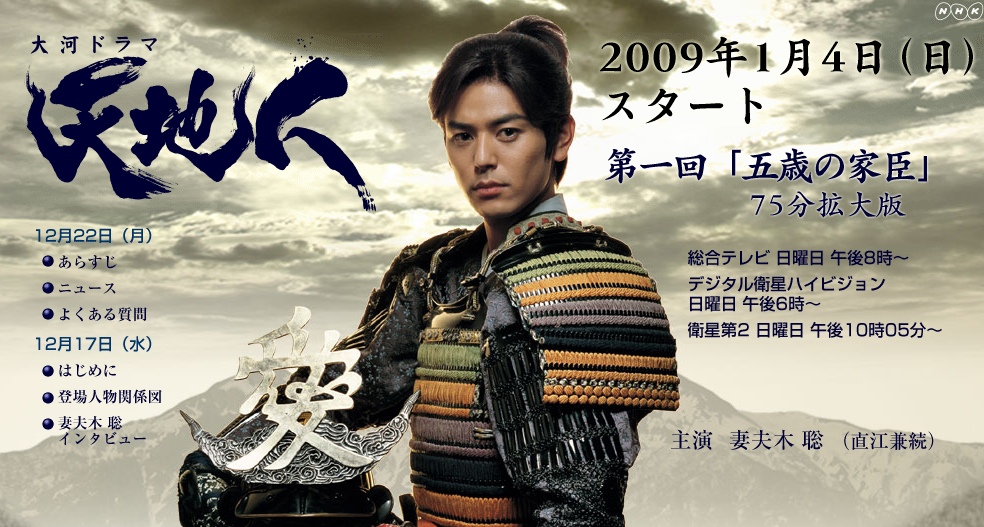 "Tenchijin" centers on the life of Naoe Kanetsugu, a samurai who lived in the 16th century in Echigo Province in north central Japan. Kanetsugu was trained by Uesugi Kenshin, who taught him that living one's life with honor and integrity was more important than winning battles. After Kenshin's death, Kanetsugu continues to loyally serve the Uesugi family, supporting Kenshin's son Kagekatsu and the people of Echigo.

Mihajlo Petrovic Mar 14 2016 2:58 pm Congratulations, drama is exceptional and enchanting.It takes up all the attention of the viewer and does not allow the viewer a respite in sight.Congratulations once again.Also, Japanese women are the most beautiful women in the world If we judge by the actress in this drama.:)

DaDa Nov 13 2012 8:25 pm Honestly, the only thing I remember about this drama was the ending. It was beautiful. It brought a tear to my eye.

Utada Hikaru Feb 18 2010 1:33 pm They have some of my favorite J-actors in one drama! However, some of them don't seem as if they're going to appear on screen a lot.

shingo mathieu Oct 22 2009 9:06 am Behold! The newest Taiga drama to date and the characters look more like they have just opened for SMAP than they look like they were from the 1560s. These were warriors that took heads to their lords for promotion - not pretty boys that I'd even have sex with! Come on!

BTW, nice to see Jo Shishido back on the screen again. Just watched Youth of the Beast and now I no longer need LSD to get a psychodelic trip.

Kazuko Aug 29 2009 8:12 am I'd like to know someone who live in Brazil, speak Portuguese and is watching Tenchijin here. I'm living in Sao Paulo.

rin yamano Feb 15 2009 12:29 pm Wah, and I have just played Samurai Warrior. Isn't it a bit breaking my dream to see Oguri Shun became Mitsunari Ishida like that? I love better the Samurai Warrior version, it's more bishounen thing

Yuuki Oct 29 2008 4:19 am its a bit weird that oguri shuna and shirota yuu are right at the bottom didnt they just have really immense roles in hana kimi...oh well at least itll be fun!