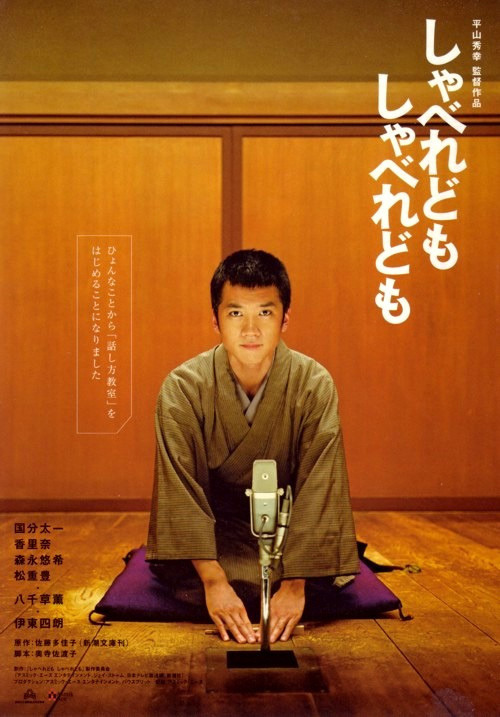 Mitsuba (Taichi Kokubun) is determined to become a successful rakugoka (traditional storyteller/comedian). He’s not particularly good at his craft and often has people walking out of his performances. His maestro refers to him as an idiot. His friend encourages him to try something more contemporary. Mitsuba steadfastly refuses to perform anything but the classics.

Meanwhile, Mitsuba suddenly finds himself as a teacher of rakugo. A lady by the name of Ikuko (Fusako Urabe), asks Mitsuba to teach rakugo to her nephew, Masaru Murabayashi (Yuki Morinaga) . He has just moved to Tokyo from Osaka and gets ridiculed by his classmates for his accent. Although Mitsuba doesn’t feel qualified to teach Rakugo, he agrees to do so anyways. Before his first class starts he picks up a another student named Satsuki Tokawa (Karina). Satsuki is an attractive 20 something woman, but always carries a brooding look. She has problems carrying on simple conversations and believes learning rakugo may help her. After a few lessons Mitsuba picks up a third student. The third student is a scary looking fellow, extremely tall and wears a surgical mask. Yet the little boy, Masaru, recognizes the guy immediately. He’s Taichi Yugawara (Yutaka Matsushige), a well known ex-baseball player. After retiring from baseball, Taichi worked as a baseball announcer, but had difficulty with speaking.