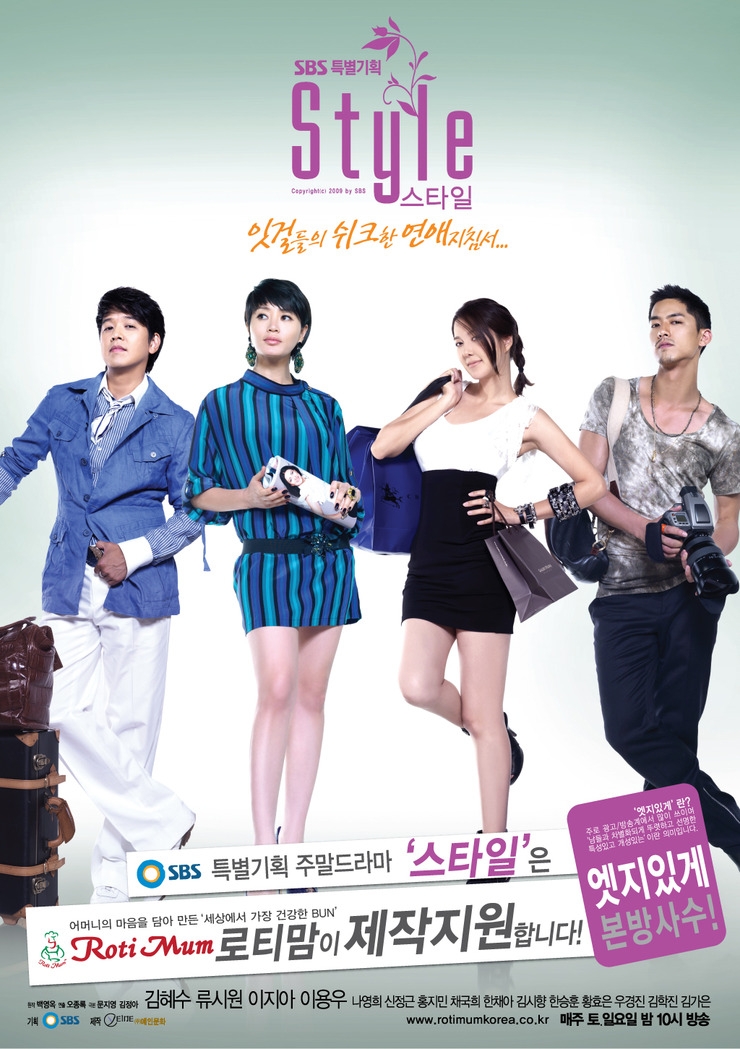 Based on a popular novel by Yeong-ok Park, "Style" depicts the inner workings of a fictional fashion magazine named "Style."

Park Ki-Ja (Kim Hye-Soo) is the perfectionist editor at Style magazine. She's extremely confident, stubborn, & self-centered, but also has a killer fashion sense. In her youth, Ki-Ja dreamed of studying at Parsons The New School for Design in NYC, but her hopes were crushed after the Korean economic crisis led her father to commit suicide. Soon after her father's death, Ki-Ja's mother moved to Canada, but Ki-Ja stayed behind in Korea. At the time she couldn't leave her boyfriend Seo Woo-Jin (Ryu Si-Won) behind, who was studying to become a doctor. But, Woo-Jin eventually dropped out of medical school and moved to New York to become a chef. Since that time, Ki-Ja has worked her way up from a lowly assistant to a highly respected editor.

Meanwhile, Woo-Jin did become a chef and eventually returned to Korea to open a restaurant. His restaurant named "Mackerel" became a hit, especially with the ladies. Woo-Jin himself is quite the ladies man, having good looks and exemplary culinary talents. He then meets Ki-Ja again as well as her assistant Lee Seo-Jung (Lee Ji-Ah).

Lee Seo-Jung has worked as Ki-Ja's assistant for over a year. Even though she has come close to having a nervous breakdown because of her demanding boss. Seo-Jung initially hoped to become a writer, but because of her financial situation took a part time job at Style magazine. When Seo-Jung meets Woo-Jin she becomes enamored with him. She knows that Woo-jin is Ki-Ja's ex boyfriend but she can't control her feelings for him.

Lastly, Kim Min-Joon (Lee Yong-Woo) is a photographer at Style magazine. He follows Ki-Ja around like a lost puppy dog due to his overwhelming feelings for her. Because of Ki-Ja, Min-Joon has stayed at Style magazine even when better offers came calling. When Min-Joon notices the attention that Woo-Jin receives from both Ki-Ja and Seo-Jung he feels jealousy.

eerlijkheid Aug 08 2018 5:17 am i think the major reason why this drama being disliked a lot was because of butt-hurt people dissatisfied with lee seo jung ending, but i like the twist ending and beside the romance story, this drama excite me more because how close this drama to the real ugly world we're living on like ronaldo said, i highly recommend this drama if you tired of watching typical '4 square' love plot in korean drama, this is the right choice definitely have to watch this drama :)

Ronaldo Feb 03 2013 12:58 pm Indeed, this tv shown the real business world (criticism,backstabbing, argument, negotiation and settlement) real great! Seeing those girls and boys working together, make me feel longing for a work like what they have, pressured and many problems but still, life is meaningful because of good working environment and bubbly co-workers.

Ann Oct 14 2011 8:53 pm I agree with comment #1! I hope it will replayed. But Ive been watching Shinning Inheritance on youtube like 3 times bc it is just a good drama! I wonder if this is a good drama

Jane Aug 31 2009 12:03 pm I missed Sunday's episode of Shining Inheritance. Will it be replayed? I am devastated. Something went wrong with my DVR and it didn't record. I tune in on SBS Time Warner Cable channel 531 in NYC. Thanks Jane