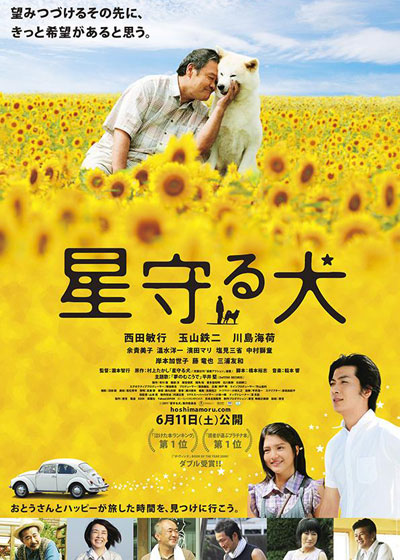 An unidentified middle aged man (Toshiyuki Nishida) is found dead in his car near a camping ground on a mountain in Hokkaido. His dead dog, an Akita, lays next to him. The dog died approximately six months after the man's death. There isn't any identification found on the deceased man.

City Hall employee Kyousuke Okutsu (Tetsuji Tamayama) is then assigned to uncover the man's identity for a proper funeral. When Kyosuke investigates the scene he discovers a receipt from a thrift store inside the car. Kyosuke's investigation begins in earnest as he traces the man's last journey. Along the way, Kyosuke is reminded of his own past and his star watching dog Kuro. Kyosuke finally learns how the man and his faithful dog spent their last days ...

Pam Aug 26 2015 1:43 pm I have watched this movie in plan on my way going to India or coming to India to US four years ago. It was subtitled in English. It was a very powerful movie about the love and friendship between dog and human. I tried to find this movie in US and on line but so far I could not find anywhere. Please let me know how to obtain this movie. Thanks.

Rosa Aug 29 2013 1:14 pm Just finish watch this movie! So heartbreaking, but also warm and beautiful. If you like Hachiko or Quill, I bet u will love this movie!