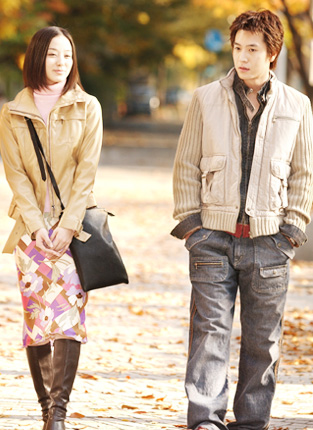 Sung-Jae (Jo Hyun-Jae) works as a guide for a part-time job on Jeju island. He heads over to a tour bus by tourist's request. During this time, Misaki (Noriko Nakagoshi) goes to Jeju island with her boy friend Shuuji (Shosuke Tanihara). Misaki meets Sung-Jae for the first time while Misaki and Shuuji have an argument.

Misaki wants to stay at a luxurious hotel, but Shuuji can't afford the hotel. Everything seems too much to Shuuji. Misaki gets depressed & wanders the outdoor stage of a hotel alone. She then hears piano music and becomes fascinated by it. Misaki finds Sung-Jae playing the piano. They say hi to each other. When Misaki leaves, Sung-Jae finds a necklace which Shuuji gave to Misaki. Later, while Sung-Jae guides tourists, he passes a car accident that involved Shuuji and Misaki.

As time passes, Misaki is back in Japan and becomes a cold person unlike her previous character. After his father's business goes bankrupt, Sung-Jae gives up playing his own music and works for a karaoke song writing company. His girlfriend Ji-Young (Lee Da-Hae) is not happy with Sun-Jae's decision. Sung-Jae gives her the necklace picked up on Jeju island.

Meanwhile, Misaki gets a job. She plans to go to Korea on business with her boss Shuichi.

Sung-Jae heads to Mt. Jiri to meet his cousin Chan-Kyu (Jun-ki Lee). There Sung-Jae also meets Misaki again, who is a member of an online star watching club. Misaki asks Sung-Jae to give her back the necklace, but Sung-Jae denies knowing anything about the necklace.

Ji-Young disappointed with Sun-Jae's listlessnes, leaves him. Misaki feels something in common with Sung-Jae. They go out and spend time together. On the way, Sung-Jae pretends to be drunk and asks Misaki to drive. Misaki refuses. Sung-Jae then asks Misaki to forget Shuuji, but she turns away.