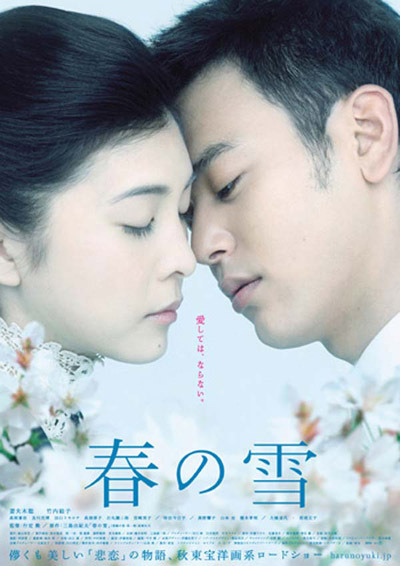 Snowy Love Fall in Spring starts in 1912, as Emperor Taisho begins his short reign and Japan's upper classes are mimicking the tastes and manners of Europe's aristos. Among them are two children, Kiyoaki Matsugae (Satoshi Tsumabuki) and Satoko Ayakura (Yuko Takeuchi).

Even as a child, Satoko had romantic aspirations in her friendship with Kiyoaki. However, her father (Kenjiro Ishimaru), wary of the womanizing ways of Kiyoaki's father (Takaaki Enoki), fears for his daughter's involvement. He instructs her tutor, Tadeshina (Michiyo Ookusu), to ensure the girl's heart is not broken.

A decade later, as Kiyoaki is finishing high school, the beautiful and eligible Satoko is still stuck on her childhood sweetheart. To avoid her, Kiyoaki playfully considers setting her up with his uptight school friend, Shigekuni Honda (Sousuke Takaoka), and writes a lurid confession of frequent trips to Tokyo's entertainment quarter, then posts the letter to Satoko before Shigekuni can stop him. That evening, Kiyoaki has second thoughts, and requests the letter be destroyed, as his decadent adventures were fabrications.