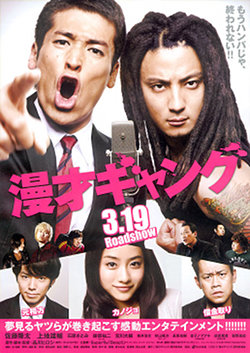 Tobio Kurosawa (Ryuta Sato), who has been part of a manzai (stand up comedy) duo for ten years, finds himself in trouble after his partner Tamotsu Ishii (Yuji Ayabe) quits due to their declining popularity and mounting debts. Tobio then attempts to drink his problems away, but the next morning finds himself locked up in a detention center. At the detention center Tobio meets tough dreadlocked Ryuhei Onizuka (Yusuke Kamiji) who has an uncanny knack for comedy. Tobio attempts to recruit Ryuhei to become a partner in a new comedy duo. Once on the outside, they start practicing ...