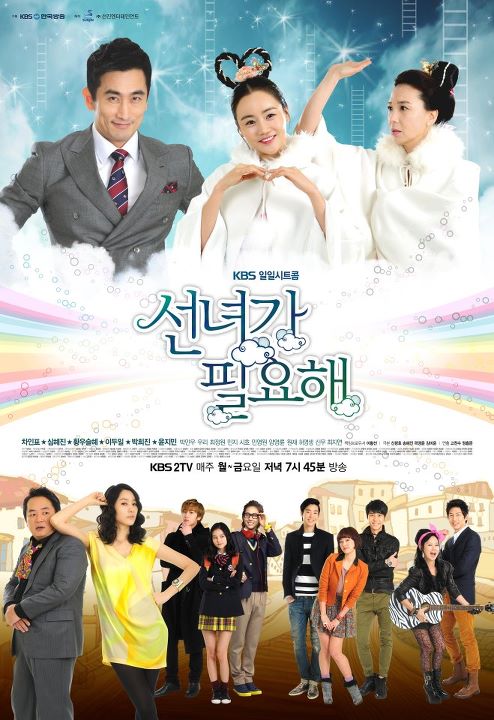 "Sent From Heaven" describes the various episodes of Taoist faires: a mother and her daughter. They happen to become grounded and must deal with their new predicament.

Fairy mother Wang-Mo (Shim Hye-Jin) and her daughter Chae-Hwa (Hwang Woo Seul Hye) go down to the ground to have a bath at a hot spring, before Chae-Hwa is to get married. They see a bunch of extras for some kind of filming session and they are wearing fairy outfits like what Wang-Mo and Chae-Hwa wears. After taking their bath, they put on their fairy outfit. The try to go back up, but find themselves stil grounded.

Se-Joo (Cha In-Pyo) is the president of 2H Entertainment. He lives with his 2 children and his twin brother. Se-Joo's son Kook-Min (Park Min-Woo), wants to become an actor, even though his acting skills are poor. Se-Joo's daughter Na-Ra (Woo Ri) is a model student. One day, Se-Joo visits a film shooting set which is financed by 2H Entertainment. Se-Joo becomes upset after discovering his son Kook-Min is taking part in the filming without his knowledge. Along the way, Se-Joo happens to steal a glance at fairy mother Wang-Mo and her daughter Chae-Hwa taking a bath. He finds Chae-Hwa attractive, but leaves.

PLJ Aug 30 2012 2:39 pm What happened to the mother / Wang-mo? I wasn't paying attention in the last few episodes, but she seems to have just disappeared.

Robert Aubrey Jul 02 2012 5:20 am My family and I have been watching the show in Woolongong Australia. We watch evey episode. We love it.

TinTin Mar 05 2012 7:15 pm Part of my favorite little vampire family is back at it again! My wish was to see "Franceska" (in the form of Shim Hye Jin) return once again to impale our funnybones in her own deadpan, deadly way. The vampiress is now a fallen angel, not that that will make those who a dare to trouble her any safer. I'm six episodes in and (even without subtitles) am enjoying every bit of the fun. Hwang Woo Seul Hye, as Chae-hwa, is great partner for Shim Hye Jin and, my favorite funnylady from the 'Franceska' crowd (who were all a scream in pretty nearly every episode!), Park Hee-jin, is once again over-the-top as the middle-aged, girl-group wannabe ajumma, Geum Bo-Hwa. Every time that they let this lady run with the script, funny happens. I hope that someone picks up the subs, but either way, I'm here for the duration. Annyeong, Franceska! Welcome home...