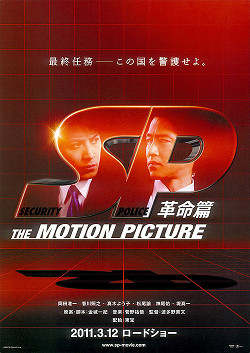 For the last 2 months the members of #4 security service at the Metropolitan Police Department attempts to discover the identity of the criminal responsible for targeting Japan's Chief Cabinet Secretary. The members also carry out their daily missions.

Kaoru Inoue (Junichi Okada) is tormented by his distrust of Soichiro Ogata (Shinichi Tsutsumi). Meanwhile, the chief secretary of the ruling party Kunio Date (Teruyuki Kagawa) and elite bureaucrats have a secret meeting. To uncover Ogata's next move, who is connected to Date and elite bureaucrats, Tanaka (Toru Nomaguchi) begins to investigate.

Around that time, Inoue is assigned as a guard for the national assembly by Ogata. The #4, new members of the #4, politician Kunio Date are there while a mysterious terrorist group gathers also at the assembly. When the assembly is about to pass a vote of no confidence in the cabient, Ogata begins to move and there is gunshots heard in the assembly ...