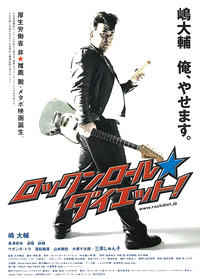 "Rock'n Roll Diet" is a weight-loss comedy, centered around 40'ish Gun-san (Daisuke Shima), as he tries to return to his younger (and much skinnier) rock'n'roll days.

Gun Eguchi (Daisuke Shima) , who is used to be a Rocker, becomes a middle-aged man. Worn-out jerseys have become much more naturally to him, even he had worn leather trousers as a youth. Those trousers have been put away deep in a storage room for many years. There is only himself who thinks that his chubby stomach is proof of his happy life, whereas his daughter has a strong dislike for his middle-age flab. He is diagnosed as heavy metabolic syndrome both in mind and body. Now, he is in a bad fix and makes up his mind to rage with his old and favorite guitar.