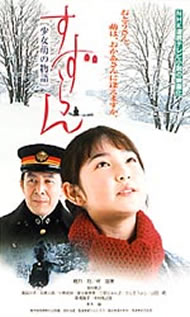 Moe was abandoned at the Asumoe Train Station 11 years ago, however, grew up to be a healthy young woman through the compassion showed to her by her foster father, Jiro.

Now Moe thinks more of Jiro than she does even her real parents. However, she believes deep down that the someday she will be able to meet her real mother.

Then one day a package addressed to Moe was delivered and inside was a red scarf. It read “Kawamoto Handkerchief”- it was a present from her mother. Jiro, not wanting to upset Moe, hesitated to hand over the scarf to her. However, fate intervened and broke up that train of thought, setting up a dramatic meeting between Moe and her Mother. The station that was used as Asumoe Station in the movie was in reality Ebijima Station on the Rumoi Line.

This is the movie version of the NHK morning series. The popular young Moe from the series is at the center of the story.

Roxie Kuramoto Sep 18 2014 8:52 pm Can you please tell me how I can get this DVD with English subtitles?