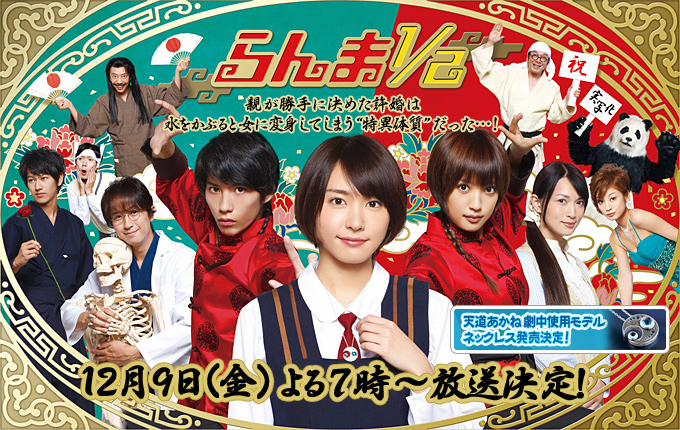 Akane (Yui Aragaki) is the youngest of three daughters for Soun Tendo. Her father Soun Tendo (Katsuhisa Namase) runs a dojo for martial arts. Akane hopes to carry on her father's dojo into the distant future.

Meanwhile, Akane has been selected to marry Ranma (Kento Kaku), the son of her father's long time friend Genma (Arata Furuta). Akane and Ranma's relationship has developed into a love and hate relationship. Also, Ranma isn't your typical boy. While on a training journey Ranma fell into the Spring of the Drowned Girl and now changes into a women whenever cold water is splashed on him. Warm water will allow him to revert back to a male. Problems arise when Akane's father declares that the successor to their dojo must be a male. Now, Akane and Ranma (being a man only half of the time) must find a secret spring that can cure him of his curse.

Max Dec 24 2019 8:13 am I'm big fan of Aragaki Yui and Hasegawa Kyoko, but this movie doesn't seem to be good. I like 'Maison Ikkoku', another master piece of Takahashi Rumiko. Both, the Anime, and Live-action-movie are very interesting and entertaining.

isola Mar 07 2018 8:12 am While they adopted the characters from the manga, the movie is not even close to the storyline of the manga! They completely changed the story and events. I still prefer the original work then this INSPIRED version. Yes this is inspired. Not adaption.

SayItRight Dec 26 2011 8:58 am I watched this movie and I loved it!! Even if I didn't see the anime or read the manga but is surely worht watching:)

mei Dec 14 2011 2:42 am this sounds so intresting...i am a huge manga addict and usually dont really like manga remakes,but when well done,they can be a hell of a drama...It was the same with Yamato Nadeshiko Shichi Henge ,i thought it was well made ,and I enjoyed watching it.But "Perfect Boyfriend" was not so well done,I liked the manga but the drama bored me to death...