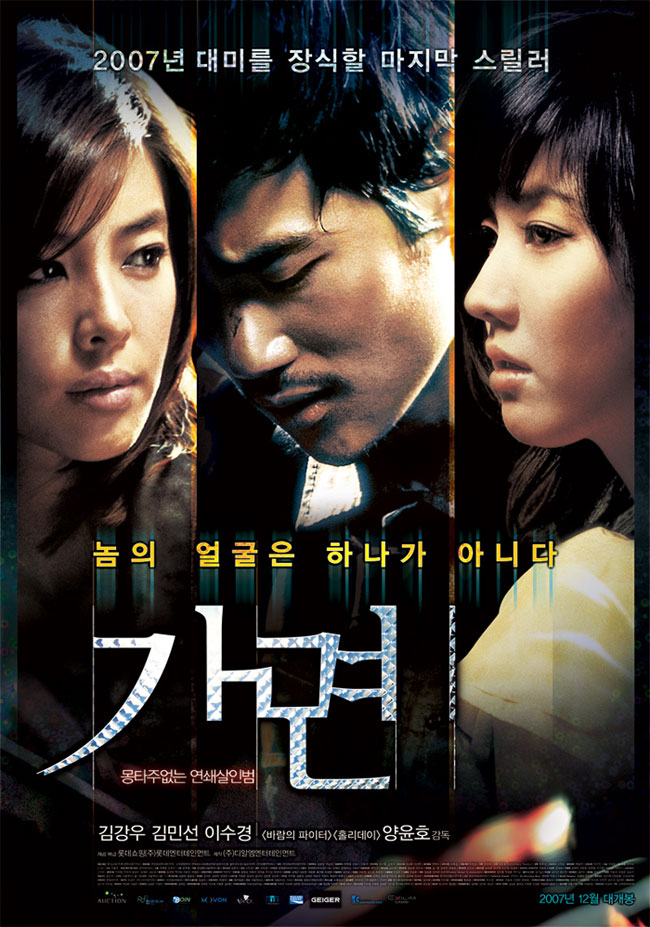 Kyeong-Yoon (Kim Kang-Woo) and Eun-Ju (Kim Gyu-Ri) investigate a grisly murder of an affluent entrepreneur. The victim was slashed over 20 times and there’s blood everywhere in his apartment. The killer was careful not to leave behind incriminating evidence, but nevertheless, a strand of the killer’s hair is found. The police are then able to determine that the killer is male and has AB bloodtype.

Shortly after the first grisly murder a second murder occurs. The victims seem to be unrelated but the modus operandi seems the same. When the police delve deeper into the victims’ background they discover that the two victims were stationed at the same military base many years ago. A month prior to their discharge they were transferred to another base along with a third man by the name Jay Bae. The police now believe Jay Bae could be the next victim or the killer. Their investigation has only just begun. jhimli Aug 05 2014 4:46 am What is the name of the actor who plays the role of detective Cho Kyeong-yoon in school, where we get to see Lee Yoon-seo with him as well, both being school students. There is details regarding every actor but not him, who is the actor who portraits Cho Kyeong-yoon as a school kid?

Excalibunny Jun 25 2012 5:52 am Hahaha, watched this a few days ago.. And my head was filled with question marks. Look at some the comments here cleared my doubts.. So lee soo kyung's charcter wasn't the killer? But then how did the police found out about her? Anyway, lee soo kyung was indeed really beautiful in the movie, especially the snow part. There were some suggestive scene in the movie, but I guess it is still alright.

chris Apr 09 2012 7:50 am Interesting movie with a twisted plot. Agreed that it is hard to know who was the real killer until the last scene. Lee Soo Kyung is so beautiful in this movie - her tears is so touching and love the story between the main actor and her.

Consus Mar 30 2012 2:18 am I loved this move. For me I fell in a love/hate with Kyeong Yoon character. I felt that he was a good cop on his job. In his personal life he was missing or covering something in his past that it hard for him to fall in love with women. The actor Kim Kang Woo was awesome in getting his character to convey that feeling. I knew he was in love with Su Jin, but wondered if they could have lived a quiet life if she would have told KY who she was a lot sooner. However, this movie kept me trying to figure out the next move.

Gasenadi Mar 27 2012 1:05 pm Just finished this movie (seems a few of us have done the same thing, run to post!). Just finished drying my tears. I found it moving. I didn't expect that in a murder mystery/crime thriller. Of course, the first time I saw the unfinished bridge, I knew that would factor in at some point. The fireworks reminded me of the Hong Gil Dong finale. Loved it!

Grace Jun 04 2011 9:24 pm Pretty good movie. I knew the story however because there is a Thai movie with a very similar plot to this one, but they are both good movies worth watching. The Thai movie is called Slice.

Jules Mar 13 2010 7:07 am I don't know why this film has such a low rating I loved it. It's not only gay-themed, but it has suspense too. It's a great detective story I personally really enjoyed it.

NO NO NO JUST FINISHED WATCHING THE MOVIE ITSELF AH AH I GET IT OH MAH GOH i’m assuming kitchen guy was the killer all along for vic. 1,2. main guy was killer for vic 3. and the girl/boy said yes balhaabalah i killed them to calm him down.

so they hadn’t needed to end their lives after all….(i’m also assuming his partner would keep the murder a secret.)

AHAHAH. I freaked out so much! it was a nice twist…..it kept me on my feet all the time. thought it was either the kitchen guy or the male yoon suh. possibly the singer when the police started discussing it. ahhh, makes me so mad how it conveys to the reader to believe this initially, etc. made me sick when the 3rd guy killed talked about yoon suh like “that” about him in the army. good movie! made me teribly upset about yoon suh’s childhood.

Ki Apr 05 2008 2:08 am Just when you think you’ve seen it all with Korean thrillers, and there certainly isn’t a shortage of serial killer based thrillers coming out of Chungmuro these days, comes along the highly stylized, utterly unpredictable, and proudly overblown, "Rainbow Eyes." The movie hits you like a shot of double espresso when you’re suffering from a sever case of cabin fever. Yes indeed, there’s plenty of angst and jitters produced in the movie’s run-up, which then leads to an absolutely off-the-wall finale that easily crosses into the realm of the absurd.

Visuals like the rest of the film, are cranked up to an excessive degree. Perhaps made that way to create a secondary smoke screen for the movie’s shocking twists that are set to unfurl, you can’t help to note the various visual tricks shown onscreen. Some scenes like the roving camera work at the police station impressed, while the sped up over-saturated outdoor scenes were overbaked. The two scenes with the clock spinning backwards was a nice touch. Also, for the first time in many eons, there’s even a stylish nude scene found in a Korean film, this one involving Kim Kang-Woo and Lee Su-Kyeong.

When thinking about Korean performers that have stepped out of their usual choices of characters there has been lot of recent attention given to Kim Tae-Hee and Son Ye-Jin. Another name that should be thrown in that mix should be Kim Min-Sun. She has made a complete 180 degree turn from the frail effeminate roles of the past. Kim impresses as a hard nose female cop in "Rainbow Eyes" Main thespian Kim Kang-Woo rebounds nicely from his lackluster performance in "Le Grand Chef" and breaths life into the pivotal character of Kyeong-Yoon. There’s also veteran supporting actor Park Won-Sang, giving the best performance that I have seen from him.

While the first 80% of "Rainbow Eyes" seemed to fire on all cylinders, when the curtain was finally raised to reveal all the secrets weaved into the film … well those answers were a few orders of magnitude too gimmicky for me. Totally unfathomable in real life, your own taste for outlandish twists will largely determine how well you respond to the finale. The movie also seemed to hinge on a twist popularized in a famed British movie from the 1990’s, but that was irrelevant to me. Thinking about the origins of influences hard enough will inevitably lead you down a slippery slope until conceivably you’re stuck at the basic question of the origins of the universe. So I won’t go there. With that said, even if you knew what movie I was referring too, you still wouldn’t guess the correct identity of the killer. It’s that crazy!

When it’s all said and done, it’s hard to deny that "Rainbow Eyes" is an exciting murder mystery / thriller, with layers that leaves you grappling for correct answers. A word to the wise about those shocking twists & surprises. You will likely never guess the correct answers because the answers are just so blatantly whacky. If that’s OK with you, than you’ll likely have a ball with "Rainbow Eyes". I know I did.