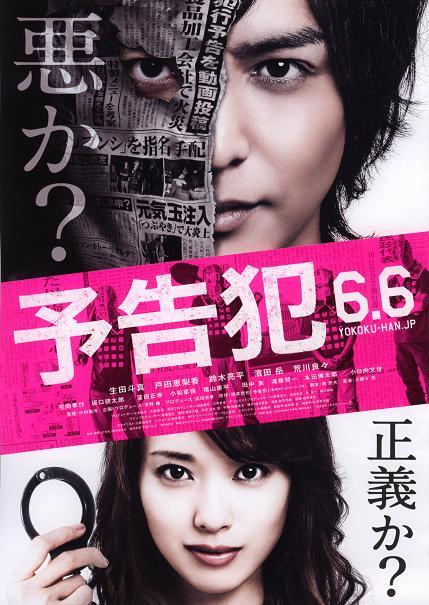 The cyber crime investigation division at the Tokyo Metropolitan Police Department finds a video on website "YOURTUBE." In the video, a man covered by a newspaper, warns that a fire will be set at a food processing company. More crime notices are soon found involving violent crimes.

Geitsu (Toma Ikuta) is the main guy behind the group "Shinbunshi," which has posted the videos. He used to work as a temporary employee at an IT company, but was unfairly dismissed. He then begins doing manual labor work and meets the other members of "Shinbushi." Billy Price Apr 27 2019 6:15 am Amazing and touching film. The compassion expressed for 'skinny' moved me very much. Thank you for making this film!

i found the part where erika was chasing after okuda so hilarious hahahah! she just kept chasing and chasing.. and okuda was like.. oh helll no... runnnn~! HAHAH!

Maria Nov 27 2016 12:37 am Just finished watching this movie and let me just say....my hearteu ~.~ The ending was just so touching and deep and my eyes keep sweating uncontrollably ~o~ Just the true friendship between the guys was so moving ~~

Miko Apr 17 2016 11:22 am The best scene for me is when Okuda told Officer Yoshino Erika that they plan the cyber propaganda to let the Police investigate the name Nelson Kato Ricarte and eventually found out that the boy (Born to a Filipino mother) came to Japan to search for his Father. Unfortunately, the boy died, probably due to poor health condition (sold his kidney and doing hard labor) but what really struck me is their reason to protect the weak, the victim of bullies, and the ostracize. The boy was not even a pure blood Japanese but they are willing to braced the consequence (Okuda died) just to protect. Maybe the story doesn't have that actual thrills or fast phasing action but its a moving and touching story.

noodle Mar 09 2016 2:43 am unfortunately it's sad ending. too easy to give up on life. although it was for a good cause but still it was unacceptable for me.

laura Jul 13 2015 6:24 am if the movie that seems interisting is out can you please find the link that you will watch i search that but i think it's not out yet so thank in advance!!!!