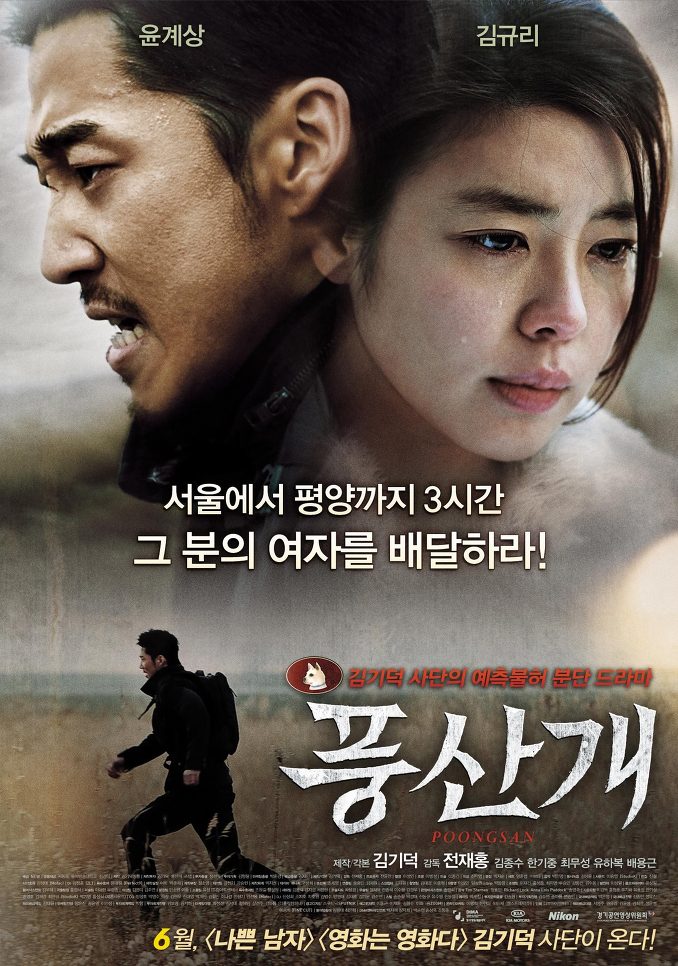 A mysterious man nicknamed "Poongsan" (Yoon Kye-Sang) crosses between the South and North Korean border as a courier for hire. There's no way for people to contact him, but instead, Poongsan picks out potential clients from banners at a make shift memorial along the DMZ. Poongsan's next target is a man who wishes to bring a North Korean woman into South Korea.

Meanwhile, a man (Kim Jong-Soo) is pushed by the section chief (Han Ki-Joong) at the NIS to write a report on North Korea. That man was a high ranking official in North Korea prior to defecting to South Korea. He's protected by NIS agents, but still paranoid that North Korean assassins will kill him. He asks the section chief at the NIS to bring his lover In-Ok (Kim Gyu-Ri) to him from North Korea. Agents from the NIS learn of a man able to smuggle people across the border. They place a banner along a makeshift memorial at the DMZ border.

During the middle of the night, two NIS agents meet Poongsan who arrives on a motorcycle. When an NIS agent asks how long it will take to bring In-Ok into South Korea, Poongsan points to his watch to show 3 hours. The agent gives an incredulous laugh, but gets back into his car and waits for Poongsan. Poongsan runs off into the night towards the DMZ border.

Poongsan heads out to Pyeongyang to retrieve In-Ok. While they are crossing the border back into South Korea, In-Ok feels an attachment to this mysterious man who doesn't speak ... Q&A for "Poongsan" took place after a screening of the movie at the 2011 Busan International Film Festival on October 10, 2011. Appearing as speakers are actor Kim Jong-Soo & director Juhn Jai-Hong. AsianWiki editor Ki Mun was there and transcribed/translated the session.

firenze Aug 26 2015 2:40 pm I have repeatedly watched this movie! Just GREAT! I super love the lead actor from the g.o.d. Korean group. Congrats to the entire production!

Francisco Oct 19 2013 8:38 pm When it comes to Kim Ki-Duk, the budget of the movie is the least I am worried about. Ki-Duk is very artistic and he directs his movies thinking outside of the box. It attracts the audience in a different way then other films. It is hard to compare his movies with others. He has his own unique style, and it never seems to fail. I would actually be surprised if I saw a high budget. Kim Ki-Duk is the type of guy that can make a movie with one camera and one actress, and your eyes will not leave the screen. However, I am saying this because I absolutely love his films and style. Since he is very unique, I am sure his movies is not loved by all. I guess you can say that when it comes to Kim Ki-Duk's movies, you either love it, or hate it. I happen to love it.

c_u_t_e 13 Feb 19 2013 4:32 pm budget is not as important as the story of this film...it doesnt seem to be a cheap movie but the actors performances are highly appreciated...yoon kye sang´s acting is awesome. although its not a happy ending it is still ok because the ending is actually what you conclude even you are still watching this movie.

TOK Sep 09 2011 1:11 pm Movie is Great, and Just read the Notes, I love those kind of actors. There are many such helpful Japanese actors like Joe Odagiri, some are Tadanobu Asano, and Eita, Ryuhei Matsuda, Susumu Terajima, shinichi Tsutsumi, Tomorowo Taguchi...

Ki Jun 23 2011 6:04 am came away very impressed with POONGSAN - movie at close range looks like a revenge film ala The Man From Nowhere but with Kim Ki-Duk's noticeable stamp on the original screenplay. macro level movie looks at the relationship between the two Korea's. Main actor Yoon Kye-Sang gives the performance of his life - he was simply awesome. Main female lead Kim Gyu-Ri not as spectacular (her North Korean accent felt way exaggerated), but she filled the role.

POONGSAN will appeal to a broad audience - if you're curious what the film is like think of a mish mash between J.S.A. + The Man From Nowhere + The Yellow Sea + those crazy Japanes death game films but written by Kim Ki-Duk. check this out!