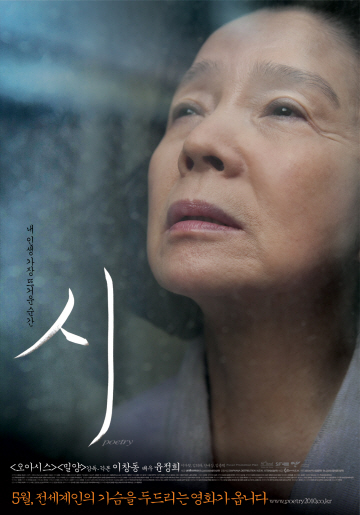 An elderly lady in her 60's (Yun Jung-Hee) works as a caregiver for a disabled man & raises her grandson alone. She has to endure the onset of Alzheimer's disease and also learns that her grandson was one of the attackers of a junior high school girl that committed suicide. Through all of this and to fulfill her lifelong dream of becoming a poet the elderly woman starts to take a poetry class and composes poems ... How is it over there?
How lonely is it?
Is it still glowing red at sunset?
Are the birds still singing on the way to the forest?
Can you receive the letter I dared not send?
Can I convey…
the confession I dared not make?
Will time pass and roses fade?
Now it's time to say goodbye
Like the wind that lingers and then goes,
just like shadows
To promises that never came,
to the love sealed till the end.


To the grass kissing my weary ankles
And to the tiny footsteps following me
It's time to say goodbye
Now as darkness falls
Will a candle be lit again?
Here I pray…
nobody shall cry…
and for you to know…
how deeply I loved you
The long wait in the middle of a hot summer day
An old path resembling my father's face
Even the lonesome wild flower shyly turning away
How deeply I loved
How my heart fluttered at hearing faint song
I bless you
Before crossing the black river
With my soul's last breath
I am beginning to dream…
a bright sunny morning…
again I awake blinded by the light…
and meet you…
standing by me.

Lenora Good Jan 07 2012 11:00 am This is one of the most beautiful, both visually and emotionally, movies I have seen in years. I was so engrossed in the movie, I did not realize there was no soundtrack until I read this page! I truly liked the people I was supposed to like, and cannot recommend this movie enough. It is marvelous. It has even inspired me to write a poem about it. (Not to worry, I won't bore you with it;-)

A beautiful movie about a beautiful woman and a not-so-beautiful disease and the way she faces it. With great beauty and honor.

Watch this movie! You will not be disappointed.

Sly Sep 24 2011 12:04 am The only thing that bug me watching this film is the over exposure of MAX Beer (the label is always facing the camera) =P

Heather Sep 21 2011 1:48 am I LOVED this film!!! It has haunted me. I will recommend it to everyone I know, and will buy it when it becomes available. I watch a lot of movies, and I've become a little jaded. This movie made me cry, and I haven't done that in a very long time. It was such a realistic and beautifully told story. I can't say enough good things about it.

Yoriko Cronin Mar 21 2011 9:35 am Have been looking for the poem read at the end of this movie, but not successful. Pls help. Yoriko

Eri Dec 03 2010 1:23 am This movie will be also on Thesalloniki's International Film Festival.

Ki Jun 23 2010 5:33 am Watched this in a local theatre in Daegu, South Korea (hometown of Lee Chang-Dong btw), and seeing the large groups of elderly women coming into the screening made me wonder if I was going to enjoy this film. Nothing against movies aimed for the elderly crowd, but its not normally my cup of tea. Well fear not if that's not your cup of tea either, because Lee Chang-Dong's latest masterpiece will simply leave anybody in any age group in awe by the end of the screening. Even though my Korean isn't perfect & there wasn't english subtitles available for the screening I enjoyed "Poetry" just as much as I did "Secret Sunshine" which was probably my favorite movie of 2007. In a way "Poetry" takes some of the themes found in "Secret Sunshine" and tackles it from a third person point of view (a grandmother - wonderfully played by Yun Jeong-Hee) - without the histrionics found in "Secret Sunshine". But that in no way means "Poetry" is in anyway less intriguing or griping. From my own point of view "Poetry" seemed to tackle similiar issues found in Bong Joon-Ho's "Mother" - with the outcome taking a totally opposite path - almost like those rebuttal songs in rap music where a popular mc retorts the song from another popular mc. HIGHLY RECOMMENDED !!!