Pieta in the Toilet 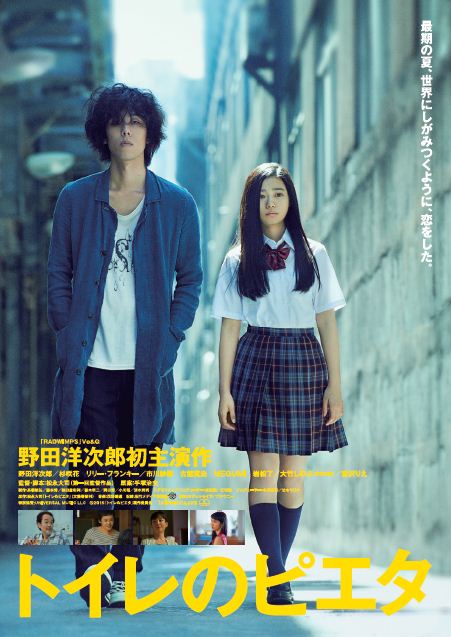 Hiroshi (Yojiro Noda) has given up on his dreams of becoming a painter and works part-time cleaning office windows. He learns that he has only 3 months left to live. During his last summer, high school student Mai (Hana Sugisaki) appears. Hiroshi becomes attracted to her.

Ryuki Dec 08 2018 3:02 pm The movie quite slow pace. But I didnt feels boring watching it till the end.. Now I realized, why Yoji noda chosen as rookie of the year for this movie. Beside making music and singing, He's good at acting as well.

Thumbs up for this movie..

Pretty Lai Sep 06 2018 8:00 am The movie has a slow paced but I did not find it boring. I enjoyed watching this one. Makes you realize that people are fighting their own battles in life.

Minji Dec 31 2017 9:06 pm @Grace Not all great movies are fast going action ones. I enjoyed this movie very much, the actors did very well. Please don't put down the actors and actresses because you thought the film was boring.

Lauren Oct 06 2017 4:23 pm This film is the most amazing mundane film. Even though the pace feels slow, I never got bored and loved every moment of it. Every single actor was amazing and this film is a must watch

Luna Jul 04 2017 2:05 pm It's a sad movie but so beautiful. It makes me think a lot because it has different perspectives on "life". I do not regret seeing this.

Grace Jun 29 2017 1:32 pm Omg! What a useless film! If anyone wanted to watch zombies on live u can see this film....Horrible actor n actress. .Worst of alll fims