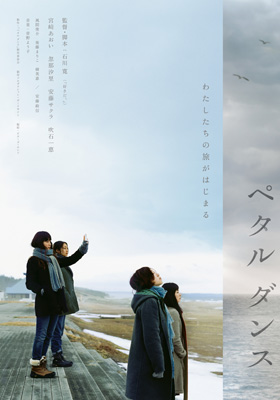 Four women, who have their own different sorrows, embark on a road trip. They look back at their past and restart their lives ...

Jinko (Aoi Miyazaki) and Motoko (Sakura Ando) have been friends since their university days. One day, they hear a rumor about their former classmate and friend Miki (Kazue Fukiishi). The rumor is that Miki ran into the sea, but got out safely. Jinko and Motoko decide to visit Miki to see if she is OK. In addition, Haraki (Shiori Kutsuna), who Jinko met at the library where she works, joins their trip as a driver. Their one night and two days road trip begins. Nitin Feb 26 2015 1:33 pm I don't know whether critics would appreciate this movie or not but it's really a masterpiece, in my opinion. With utmost simplicity, beauty and least dialogue, this movie would take you deep inside the ocean of your feelings. As far as plot is concerned it might not be what you are looking for; but if you have some artistic taste, this is meant for you.

Sometimes its better not to give form to your thoughts in terms of words, instead it becomes necessary to just feel the dynamic and ever changing world around you and inside you. I think this movie is an example of this concept. Stop trying to find solution, surrendering yourself before life and again gaining hope and liveliness from it, just like the legendary Phoenix who takes birth again from it's ashes; that's the beauty of this piece of art. Sometimes solution lies in not to find any solution and this art piece seems to me a beautiful example. I don't think many movies have been produced on these methodologies. Where Su-ki-da was a bit long, though it was great just like this movie, director Ishikawa has proved this something like a piece of perfection. This movie may seem a bit slow for some but for me this is appropriate.