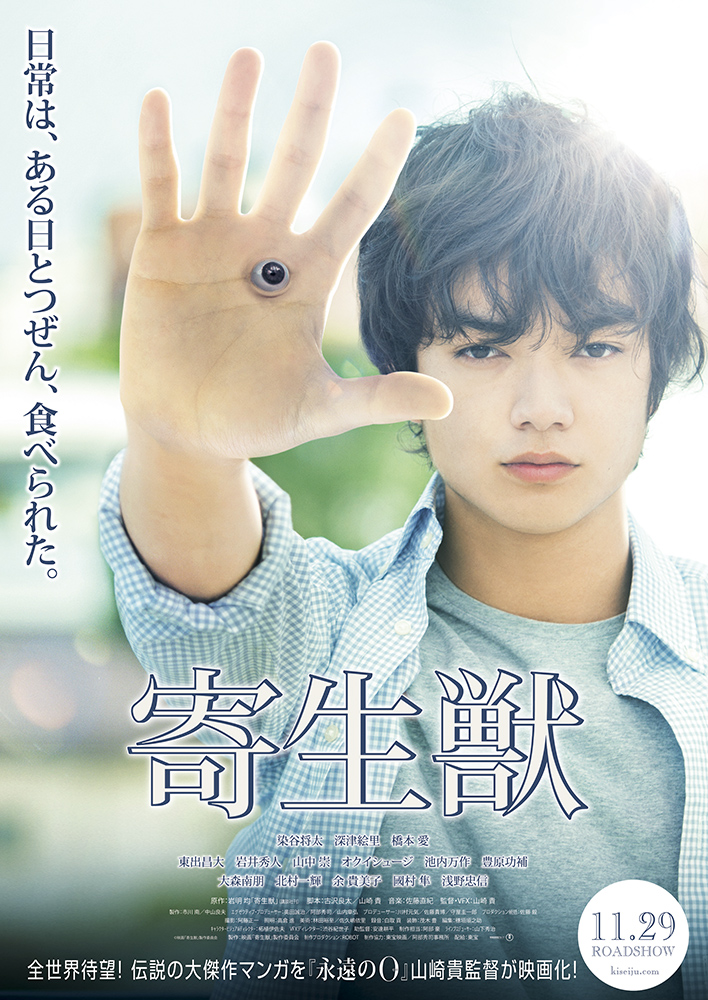 Mysterious worm-like aliens fall from the sky. They penetrate through the ears or nose into human beings and live off their brain while dominating the body. Now with human appearance, the parasites live among humans.

Shinichi Izumi (Shota Sometani) is an ordinary high school student. His best friend is Satomi Murano (Ai Hashimoto). One day, Shinichi Izumi is attacked by a parasite, but he is able to fight off the parasite before it takes over his brain. The parasite though lives within his right hand. Shinichi Izumi and the parasite now live together. Shinichi believes the parasites are responsible for countless murders all around the world and he feels responsible, because he knows the truth.

Meanwhile, Ryoko Tamiya (Eri Fukatsu) is a teacher that starts her new post at the same high school where Shinichi attends. She has been taken over by a parasite and comes to observe Shinichi. Lord Kikuchiyo Aug 23 2018 1:06 pm I read a lot of negative comments about this movie adaptation on YouTube and other platforms, tried watch it myself and pretty surprised on how good the movie is. I think most people who commented bad things about this movie didn't even watch the movie yet. They watched Attack on Titan and Fullmetal Alchemist and assumed all live action sucks (No kiddin AoT and FMA live action really sucks), but this one right here is good, surprisingly good. I actually like the fact that it doesn't follow exactly the anime, instead they change it to fit 'real people' - making them less cringey. If anything I kinda wish they made it as a series instead of splitting the movie into two parts because it does look like they were made in a rush. There are a lot that can be improved though. It may not be as good as Rurouni Kenshin or Erased the series but it certainly isn't as bad as Attack on Titan or Fullmetal Alchemist. Just as good as live action can be.

Apple Sales Jul 26 2016 12:35 pm I love this film. Thoughi don't know it was from a Manga story.. But since my brother is into movie ventures, we came across this film. Even though I only watched it in full 2nd time I came across it again, I think I liked it so much and is looking forward for the part 2 to finally come out. Im loving that cute alien on shinichi's hand. I wish I could have a toy like him here. But in a meantime I think I'm just gonna look for a wallpaper for him. :) 2thumbs up for this film.  :)

rixzeiya Jun 15 2015 9:25 am this live-action adaptation is so good . . I love it . . I actually have low expectations of this movie cause I'm a fan of the anime series and thought that this might actually turns bad, but as I watch it, I'm surprised that it turns out really good, the action scenes is great. . one of the best movie I watched . . looking forward for part 2, I wish it will be shown here in our country , . .

Rommel Reyes Feb 12 2015 9:49 am I live in the Philippines and I watched the film earlier in a movie house, it was fantastic. one of the two movies that I really enjoyed watching at the start of this year, the other one is Nightcrawler by Jake Gylenhaall. Loved the Manga so much and i am following the weekly anime episodes on Animax, just finished with episode 19. I was expecting to be disappointed because most adaptations are but this one managed to capture the atmosphere that exudes in the manga. Hats of to the people who gave great effort to produce this amazing piece of masterpiece.

Faye Jan 17 2015 9:36 am Just watched it today and it tense up my heartbeat. Gore with dead bodies everywhere, although blood splashing is still minimum. I think it will be a good starter until Attack on Titan live action. For me, there is no boring conversation even one bit in this movie, makes it enjoyable to watch because it just filled of important part in all dialogues. Hope the second movie will have more action/fighting.

RyuShota Mar 07 2014 12:45 pm I really love this manga! But I think that Sometani doesn't fit Shinichi Izumi because of appearance. Btw cant wait to watch the movie LA xD