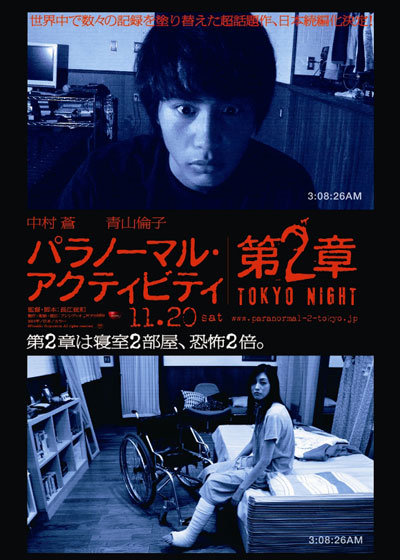 The Yamano family lives in a secluded home in a remote Tokyo residential area. Their 27-year-old daughter Haruka (Noriko Aoyama) suffered a compound fracture in a car accident while traveling in America. Haruka returns home in a wheelchair.

There to meet her is her younger brother 19-year-old Koichi (Aoi Nakamura), her younger brother. Their father is away from the Yamano resident due to a business trip abroad. Koichi is left to take of his sister for until she can walk again.

Not long after, strange occurrences happen in the Yamano home. Haruka's wheelchair, which was left in her room, is found in another room. Their is salt found spread around their house.

Koichi becomes uneasy by these events and, because of this, he persuades his sister to set up a video camera in her room. The video camera is connected to a computer screen so Koichi can see what is going on and, if necessary, run to Haruka's room.

What Koichi discovers is beyond anything he could have imagined. Noises at midnight, a cup on a table breaks, even a friend, who never gets scared, becomes terrified. The situation worsens with Haruka and Koichi threatened directly. Finally, a terrible fact is revealed ... na Jul 02 2013 2:29 am i've just saw aoi for first time at paranormal activity, 10-20 minutes i just watch it regularly, then there is his close up shoot, oh my he looks like won bin ^o^ i think won bin just exactly like aoi during his teens

Mary Sep 08 2011 1:26 pm It's was good, better than the second american one, but i still like part one of the american. I so want this movie though :D

caitianlong Mar 24 2011 10:02 am The film could've been better. It lacked the sense of realism that the 2 American have, perhaps because of the acting. Creative scare sequences though, but all in all, really could've been improved.