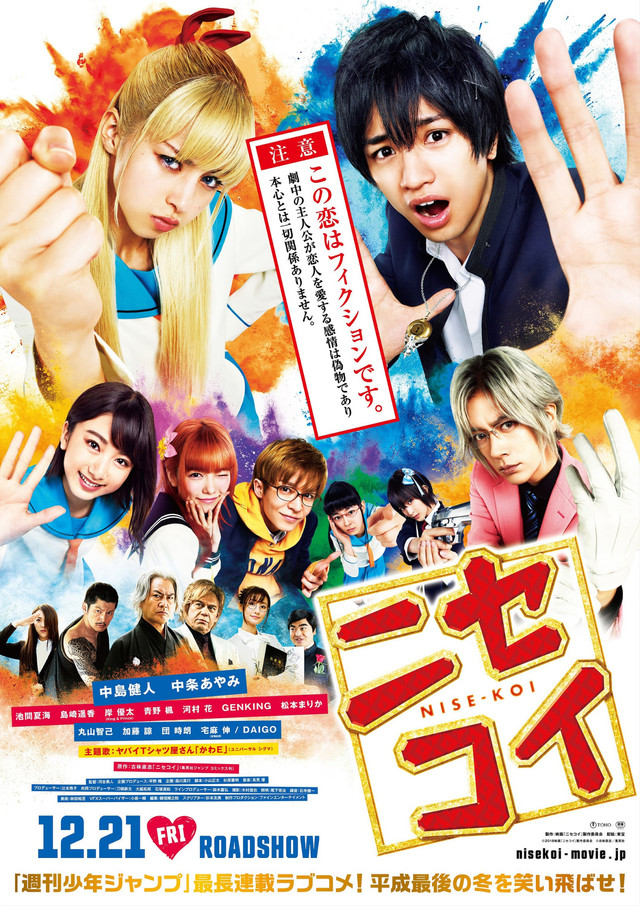 Raku Ichijo (Kento Nakajima) is an only son and a high school student. His father is the leader of yakuza group Shuei-gumi. Raku Ichijo doesn't like to fight and he studies hard. His dream is to become a public official. One day, he passes the entrance gate at his high school and is kicked inadvertently by Chitoge Kirisaki (Ayami Nakajo). She is a new transfer student at the school. Chitoge Kirisaki is the only daughter of a rival gang leader. To keep the peace between the rival gangs led by their fathers, Raku Ichijo and Chitoge Kirisaki decide to act as boyfriend and girlfriend.

Sakura Jul 31 2019 4:32 pm If you liked Gokusen, the live action series, you would enjoy this Nisekoi: False Love movie ... Not a moment wasted and for someone who does not watch anime or read manga versions of plots or even what a movies plot it about ... I felt the pacing in the film was good and nothing cringe worthy for me. I think Kento Nakajima really led well here and it becomes interesting to watch his acting.

ren Jul 15 2019 2:52 pm this movie doesn't take itself seriously at all so it was a blast to watch. i really wasn't expecting to like it but boy was i surprised. the scene at the movie theater with the korean ballad playing really cracked me up.

Jpoper Jun 30 2019 2:44 am This is far better than I have expected. So hilarious, so cute, and everything! I definitely recommend it! It's well made. Kudos to the actors, staffs and the production team and the director! I really enjoyed it. Thumbs up! ??

Mana Jun 28 2019 11:31 pm This is a good live action. Super cute! Very funny and i love all actor. Kento nakajuma acting is better than ayumi nakajo..even he is an idol...shu too. They bot idols but their acting are no joke.

The music when onodera appear is kawai!! I want that for ring tone..what is the title!?

asuka May 19 2019 11:33 am Loved this anime so much but this live action teaser not impress me much.. Sorry to say but Ayami Nakajo has different aura that i expect from Kirisaki Chitoge who charming, cute, quirky, bubbly with tsundere personality. Natsumi Ikema seem to fit Onedera Kosaki character well though i slightly hope that Shimazaki Haruka would play Onedera role ^^

Yasushi Oct 29 2018 1:49 pm I am already comparing this with the anime, I won't be watching after all. I cannot think of anyone else's voice for Onodera than Kana Hanazawa lol

Ace_kirito Aug 02 2018 3:13 pm hoping to be a good live version excited because anime favourite well being honest trailer don't impress me much can't wait to watch it

MuraYoshi21 Jul 24 2018 7:18 pm Since they casted Shimazaki Haruka... they should've casted her as Onodera Kosaki instead.

ntr48 Apr 23 2018 4:05 am I really expected from the very first that kento nakajima will be raku and i'm very happy that my wish have been granted <3 <3 and i didn't expect ayami nakajo to be chitoge i know she will do her best to play the role as chitoge <3 i wish rena takeda is onodera