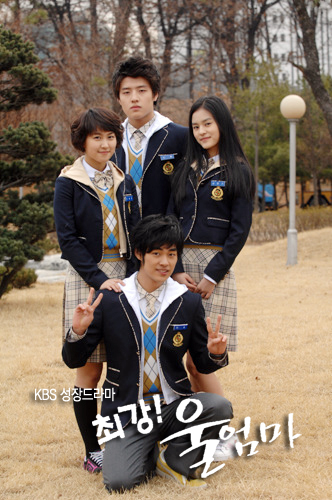 "My Mom! Super Mom!" is a drama about the family and the ways it grows.

Choi Kang (Jin Won) is a 17-year-old freshman in high school. He does not study well, but has a bright outlook. His dream is to be an action actor, so his hobbies include exercising and sports. He is absent-minded and loses pretty much anything. With his positive character, he gets by his mother's scolding.

Choi Kang's mother Ko Min-Joo (Shim Hye-Jin) does everything for her family and their education. She is a typical Korean mother figure. Min-Joo lives with a fastidious mother-in-law, incompetent husband and two kids. She takes care of family and work.

Choi Kang' s father Choi Man-Suk (Jeong Won-Jung) is an unknown theater actor. Sometimes he makes troubles, but for his family he works part time without them knowing.

Choi Geon (Lee In-Sung ) is the second son of the family. He is smart, but somehow fruity.

Choi Hoon (Kang Ha-Neul) is a 17-year-old freshman in high school. His cousin is Choi Kang. Choi Hoon studies well, but he doesn't speak much and often looks indifferent. Inside he is frail and looking for love. Choi Hoon becomes a rival with Choi Kang over Eun-Ki (Woo Ri).

Oh Chae-Rin (Park Min-Ji) is also a 17-year-old freshman in high school. She is a perfectionist. Chae-Rin is also stubborn and tough, but inside she is feminine and soft. Chae-Rin comes to like Choi Kang.

May Nov 14 2010 3:01 am Where can i watch the whole drama? KBS has already screened almost half of it finished

jason Nov 06 2010 8:40 pm i am from syria , i watch this series on KBS world, i learn so much about this society, i think its a great culture, life loving and simple. Koreans have great history too, 2 thumbs up

juno Jan 28 2010 9:54 am i love you park min ji(chae rin).i really miss you. i very glad to hear you and jin won(choi kang)were love.this is my wish.i want to see your movies and series more and more.bye.miss you