My Darling is a Foreigner 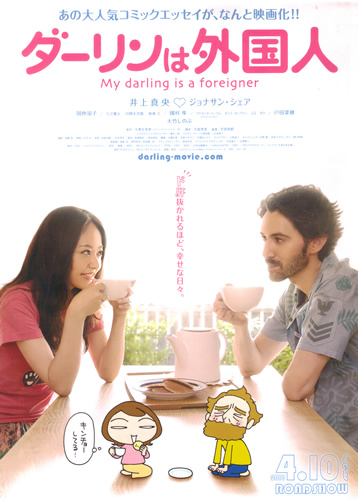 "My Darling is a Foreigner" tells the quirky story of a Japanese woman and an American man as they enter into a relationship and eventually marry. Saori (Mao Inoue) is a manga artist. She meets language geek Tony (Jonathan Sherr), who has arrived in Japan after falling in love with the language. As the couple become closer, Saori is inundated with strange questions about the language from Tony. Are these weird questions a trait of his foreign background? Or is it because of his linguist preoccupation? More importantly, can their relationship survive? eddie Aug 27 2012 6:23 am to Alina and kujo, the song is くればいいのにfeat.草野マサムネ from SPITZ - http://www.youtube.com/watch?v=rSAyBoMImaQ

Jerry Aug 17 2012 9:14 pm After living in Japan for 17+ years I now know enough Japanese to understand this movie. It was cute, outrageous, typical and whatever you want to throw at it. Fairly accurate to a point but hell, this is a movie. My Japanese wife forced me to watch it and as usual the movies she suggests are rather good. As long as you realize this is still just a movie you can enjoy it.

So all the comments of unrealistic reactions or situations should just be ignored, since it's the author's own memories. Besides, when making a comic, you sometimes have to exaggerate a little in order to make it funny. And is it uncommon for language enthusiasts to be experts at the language, but totally blue when it comes to parts of the culture.

I can't wait to see this, I really enjoyed the books when I was studying in Japan! And I can to some degree recognize myself ;D

kujo Nov 26 2011 10:36 pm is anyone know what is the soundtrack song when Saori ran from her song to the airport, after she broke up with Tony ?

Sophia Jun 17 2011 2:32 am I agree with NDLL, This movie is about the "Looks", its about The Love this Couple Has and the Difficulties they had to Overcome, and That Love has its own Language! ^w^ lol

NDLL May 25 2011 11:19 am OMG stop commenting on the man's look!! It is so much more realistic this way. Go watch some cheap ass korean drama if you want the guy or the entire cast to look handsome/pretty...

Jim Mar 04 2011 9:44 am Eamon has some good observations but it is entirely possible for someone to have plenty of linguistic / book knowledge and be clueless in social context. Many people who study Japanese before they come to Japan are like that. Everyone I know has plenty of gaffe stories, regardless of their level of study.

Also, as a guy, I think him being clumsy in social situations and with hosuehold stuff is spot on. Bachelors generally have low standards, and it only becomes an issue when you live with someone who doesn't. I myself lived entirely off combini food for years to avoid doing dishes.

"Interesting that the Japanese girl is convinced the boyfriend's family will not accept her because she is Japanese, when in fact it's her family that does not accept the gaijin guy. She also totally takes for granted the stuff he does for her, like washing and making her tea, stuff no Japanese guy would do but instead of being happy she complains he does it all wrong."

That's why I felt it was an original treatment. Life is like that. She assumes she knows her family, but discovers she is wrong. And the role reversal with the guy being "ikumen" and her taking for granted was interesting.

I usually cringe at treatments of foreigners and “international couples” in movies and tv. I was ready to dislike this one too. But the characters, being based on real people, come off as individuals, not stereotypes. They are quirky and unique. I thought it was a rather refreshing take on the topic. It’s probably even a step forward for more down to earth treatment, and surprisingly non-negative portrayal, of intercultural marriages. Overall, cute 'romcom' movie about intercultural relationship, that while laughs at quirky differences, doesn't descend into stereotypes. Quite a pleasant surprise.

wolfinthesky Sep 23 2010 3:21 pm having lived in japan as a foreigner, i'd say eamon's comments are spot on (nothing wrong with going into detail...). every culture looks at outsiders and gets things wrong - usually very wrong. but i'm still looking forward to seeing the movie. also curious about dareka ga watashi ni kisu wo shita.

Eamon de Valera Sep 03 2010 10:11 pm I saw this movie, it was cute but also had a lot of silly things, and many things that just did not make sense, plus, the obligatory making fun of of how dumb foreigners are. Fortunately, Westerners are not as sensitive to these things as most Asians are, so my reaction was simply "that's dumb," rather than to be offended.

First, the main character speaks exceedingly proficient Japanese, and so must have lived in Japan for quite some time and studied very diligently. And yet, he is shown throughout the film to have not a clue about Japanese culture and be totally unaware of basic culural differences. This makes no sense. He also does dumb things that are not cultural gaffs, in that they are not things a Westerner might do unaware that it was inconsistent with Japanese culture. For example, he takes his girlfriend to a party where every single other guest is foreign, then ignores her for hours. In America, I would not take a date to a party where she knew no one, not introduce her to anyone and ignore her for hours, and this guy is otherwise quite considerate.

He is also shown to be "trying" to become a better future husband, by doing laundry and washing the dishes, which of course he proves to be hopeless at, being both a foreigner and a man. It made me wonder: He'd been living on his own for years before he met the Japanese girlfriend, how did he manage dishes and laundry before that? One thing he did was wash the dishes and leave the soap on when he put them up to dry: People in England do this, but Americans usually rinse off the soap after cleaning (this guy is supposedly American). Then there are vignettes of dumb things Japanese girlfriends' foreign guys do, like putting Tobasco sauce in beer (I've been a gaijin all my life, I've never heard of that - anyone?). Oone guy brought white flowers to his girlfriend, OK, he would not have known those are used for funerals (the US postal service put white flowers on Chinese new year stamps in 2009, same thing: Chinese would be mortified by this, white being the color of death and white flowers for funerals only, really, really bad luck especially at the start of the new year).

Aside from that, it was a cute little film with some moderate insight into the ins and outs of cross-cultural relationships, moderate, very moderate and superficial ones, but I guess the film was meant to be a light-hearted comedy. Interesting that the Japanese girl is convinced the boyfriend's family will not accept her because she is Japanese, when in fact it's her family that does not accept the gaijin guy. She also totally takes for granted the stuff he does for her, like washing and making her tea, stuff no Japanese guy would do but instead of being happy she complains he does it all wrong.

But if you are interested in Japan and Japanese culture, you may find this amusing, as I did.

Nackar Jul 10 2010 12:55 am Wow, what a bunch of pointless superficial comments. Proud of yourselves?

Kat-tunLove Apr 13 2010 10:41 am looks good :D can't wait! i also wanna see Dareka ga watashi ni kisu wo shite (memoirs of a teenage amnesiac/ someone kissed me) and BANDAGE, but all the gd films seem to be coming out in japan and not England! its gonna take a while :/ x

BlueLacedMelody Apr 09 2010 5:54 am @sorao and LOL, have you seen the manga? They're just following the characters' looks @raku, i agree

tojo Apr 05 2010 4:17 am Did they choose him because he looks a bit Japanese and non-macho, ie non threatening "grass eating" man, as We Japanese say?

Raku Feb 04 2010 10:18 am I would guess they are going for accuracy as the character that he's portraying has a beard in the manga.