My DNA Says I Love You 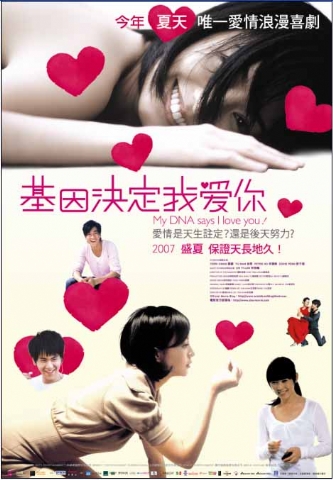 Neat freak Gigi (Terri Kwan), who changes boyfriends almost as quickly as she changes her underwear, and depressive Marlene (Yu Nan), who pines for her workaholic lover (Lin Yu-lun), both work for a biotech company that manufactures character-changing pills. One day, to snag a slobby guy (Peter Ho) she fancies, Gigi decides to take some untested pills, which causes all kinds of chaos. Meanwhile, Marlene is romanced by her landlord's son, handyman Teddy (Eddie Peng).

Bubbly and sexy, Kwan ("The Heirloom") nails the fast, loopy tone the pic needs, and gets good support from most of the cast. However, Yu, more adept at drama ("Tuya's Marriage"), seems miscast, dragging the picture down and not creating any special chemistry with Kwan. Though pic is set in a deliberately nonspecific, clinically neat Anytown, China, the prevailing mood and humor are very Taiwanese, making Yu (the sole Mainlander among the leads) further seem like a square peg in a round hole.