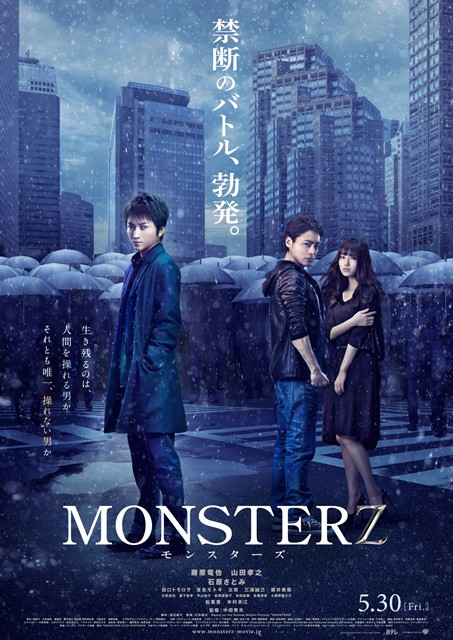 A man (Tatsuya Fujiwara) possesses a special ability to manipulate others with just his eyes. Because of this special ability, he killed his abusive father and was abandoned by his mother. He now lives a lonely life in the dark side of a city.

Meanwhile, Shuichi Tanaka (Takayuki Yamada) doesn't have a family and lives with his friends. Even though he is poor, he has a bright outlook on life.

One day, these two men meet. The man becomes confused, because he can't manipulate Shuichi with his eyes. Lia00027 Jul 13 2016 11:53 am As always Tatsuya Fujiwara delivered wonderful acting as the dark character but a pitiful one, audiences seldom to sympathize with his kind of merciless and cruel character but he could showed the sorroful side of his character dark side which is amazing. I felt attracted to his acting when he was acting on "death note" and always sympathize with his character, indeed he is one of the best actor in Japan. Takayuki Yamada's acting was overshadow by Fujiwara's performance but his acting is not bad but didn't give much impression as usual. While Ishihara Satomi's acting is never change to explain more it's hard to differentiate her character from another dramas or movies since her acting feels similar. Fuji Mina's character is rather annoying and useless, she is very lacking on acting.

Overall the plot is ok but a bit slow and i don't intend the korean version even thought its the original one since Japanese usually make better and deeper plot for a remake like "maou/the devil" well except " a moment to remember".

Naoki993 Nov 29 2014 2:30 am This was better than the original Korean one.Korean original doesn't seem too serious with the plot which it needed to take more seriously,but i'm glad to know a horror director Nakata Hideo made it more seriously which i was hoping the plot should 've been like this in the original korean version.So Nakata did improved quite pieces from the korean version,though it was not the best but still a good remake which i would recommend everyone to see it.Fujiwara sama and Yamada sama still give their best :)

fifi Aug 26 2014 12:32 am Ooh omoshiroi! I always see Korean remakes of Japanese movies or dramas. Oh well, this time it's the other way around. Of course I'll check it out! It's Fujiwara-sama! :D

Shawn Jun 29 2014 11:45 pm Damn they made this look more hollywood style. The korean version was much simpler. I hope this is good.

ran Dec 19 2013 7:36 am i hope tatsuya fujiwara could portray the man with special power very well, since Gang Dong Won already made a very good job for it... well, no one can beat GDW tho (IMO) hehe...