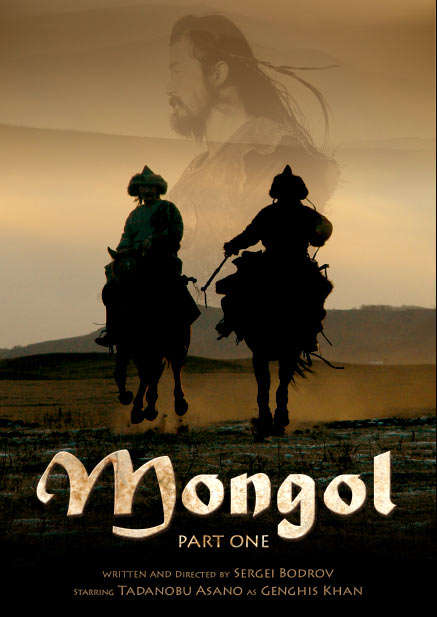 “Mongol” takes place during Temudjin’s (Genghis Kahn) early life, from 1171 all the way up to 1206. At the age of 9, his father takes Temudjin to a distant Merkit village to pick a future wife. Along the way, they stop at a smaller village where Temudjin meets Borte, a young girl that is one year older than him. Temudjin decides then and there that Borte will be his wife. After the appropriate ceremonies, Temudjin leaves for his own village and promises to come back in 5 years time to marry Borte.

While Temudjin’s group travels back to their home village, they stop at another resting place and sit next to a rival group. Temudjin’s father accepts the other group’s hospitality drink, even though one of his men advises him to be weary of the other group. Shortly later, when Temudjin’s group is back on the road, Temudjin’s father becomes ill and suddenly collapses to his death. When Temudjin returns home, he finds his village in chaos because of the power vacuum left by his father’s death.. Temudjin is then imprisoned, with the clan’s new leader planning to kill him when he becomes of age. By fate, Temudjin escapes his imprisonment and travels across the Mongolian desert to unite with his half brother and exact revenge on those who imprisoned him.

lawrence Dec 28 2009 4:41 am This movie lacks cohesiveness and details. It’s a complete disappointment.

Naomi May 29 2009 10:40 pm this movie is all bullshit. nothing is fact or true. that stupid bastard sergei twisted everything that ever happened, dubmass russian.

michael Mar 15 2009 6:47 am I watched this film last night and was thoroughly impressed at how visually stunning it was. It was as if I had stepped back in time and was observing Mongol life as it truly used to be. The brutality of the warfare was matched only by the strength of Temudjin's love for his wife and his people. The locations for filming were utterly incredible and the fact that the actual Steppes of Russia (where Temudjin lived much of his life) were absolutely breathtaking! This was an awesome move, to say the least.

Ki Feb 11 2009 5:24 am “Mongol” is the highly anticipated new Genghis Khan film made with an international flavor. The film features noted Russian director Sergei Bodrov, Japanese actor Tadanobu Asano in the lead role, Chinese actor Honhlei Sun in the supporting role of Jamukha, and first time Mongolian actress Khulan Chuluun in the important role of Borte (Temudjin’s first wife). Filming took place over a large span of land that formerly consisted of the Mongolian Empire: China, Mongolia, and Kazakhstan. The end result of all this you may ask? A movie that is part breathtaking, part hallucinatory, and always intriguing.

Sergei Bodrov’s “Mongol” comes across as an unique film, staying mostly true to historical accounts of Genghis Khan, while occasionally taking liberties for dramatic effect (specifically Temudjin’s 10 year imprisonment). The film is based off “The Secret History of the Mongols,” the oldest surviving Mongolian literary work and “The Legend of the Black Arrow” written by Russian historian Lev Gumilev. Using those two literary works as a jumping board, Bodrov then tells the story of Khan’s early years, infusing the film with his own mystical feel. The soundtrack pumps up the mysticisms with a score that could have easily inspired the Beatles’s “White Album.” Visually, the nomadic lifestyle of the Mongols is re-created faithfully, while the depiction of the masked Merkits sent chills down the spine. The actual battles that Temudjin fought are shown only a few times in the movie, but when they are depicted they are done in a up close and personal way. Blood is quickly splattered everywhere, as Temudjin slices his foes with the his deadly scimitar in an ultra realistic manner.

Concerning the personal life of Genghis Khan, Bodrov makes a point to accentuate Temudjin’s more progressive nature. Temudjin didn’t think twice to accept Borte’s first child as his own, even though the child was likely fathered by Merkits. He also trusted Borte to advise him on all matters, including those involving warfare. Although being Japanese, Tadanobu Asano seemed perfectly cast as Temudjin. He morphed into his role in a way where you never thought “that’s Tadanobu Asano,” but rather “that’s Temudjin the future Genghis Khan.”

Drawbacks in the film existed with the mystical nature in which important moments of Temudjin’s life went left unanswered. His escape from imprisonment, the removal of the wooden contraption around his neck, his survival from a fall into icy waters, and his escape from a Tangut Prison were all moments where the movie provided no real answers on how they occurred. The flip-side of this is that because those important moments were left unanswered, viewers were left to theorize about the mystical nature of Temudjin in the same way Mongols of that time theorized about Temudjin’s life. By the time the film came to its conclusion, I didn’t mind the open-ended nature of the film and instead soaked it up for all it was worth. Temudjin was indeed a mystical figure and Bodrov’s “Mongol” paid tribute to Temudjin in the same manner that “The Secret History of the Mongols” paid tribute to Temudjin: with the abundant use of folklore and (visual) poetry. Regardless of how the 2nd and 3rd installments of the planned trilogy on “Genghis Khan” pans out, “Mongol” distinguishes itself by mixing together the historical and mystical to create one absolutely riveting film.