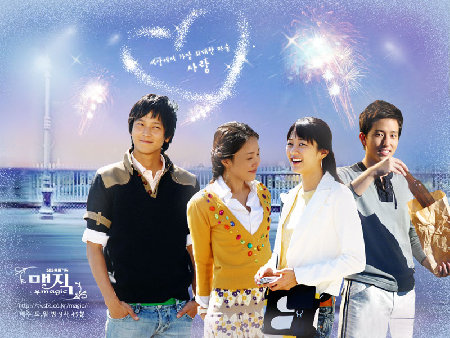 Kang-Jae (Gang Dong-Won ) grew up under a jobless, gangster father. When Kang-Jae accidentally meets Lee Dae-Hae (Seo In-Seok) and his son Sun-Mo (Yang Jin-Woo), he feels more attached to Dae-Hae than to his own father. Through Dae-Hae and Sun-Mo, Kang-Jae learns the basics of magic as well as what fatherly love really means. Sun-Mo, on the other hand, has a love-hate relationship with his father, who only cares about magic and nothing else. Meanwhile, Sun-Mo is heartbroken by Dan-Young (Kim Hyo-Jin), who falls in love with Kang-Jae. Before that Dan-Young was living with Sun-Mo, mistakenly thinking that he is her long-lost brother before she was adopted. Yun-Jin (Uhm Ji-Won), Dan-young’s stepsister, instantly falls in love with Kang-Jae and Kang-Jae decides to marry her, not for love but for the sake of fulfilling his own ambitions at the price of spurning Dan-Young.

fritzie gammad May 05 2014 2:02 pm i don't know why their saying that this drama was not that successful..the story was good it was full of twist..and I really love it..not just because I was a fan of Dong won...but for me this is surprising and distinguishing..not just a simple love story..I really love it..

TAMA Jul 15 2012 9:05 am I like the drama with Kang Dong Won but I don't watch the film Somebody help me , I want the link film English sub Thks so much