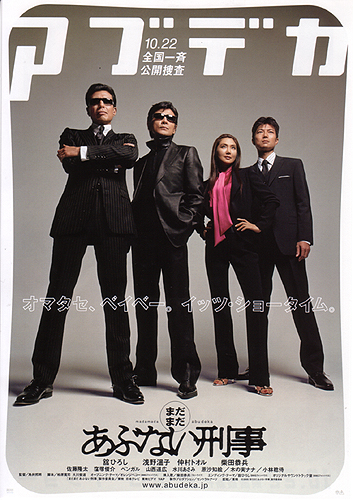 Pusan, Korea. Silhouettes of two men wearing long coats appear in the dark. These silhouettes were ones of Taka and Yuji, both who disappeared years ago in the sea at Yokohama after a bombing. As undercover cops, they were now following a huge scaled deal. Nuclear Weapons. And these weapons have been snuck into Japan. The two return to Japan for the first time after their disappearance from the Yokohama Port, but they get attacked by rifle bullets. Two young cops rush to the scene, and Taka and Yuji both get taken away. The police station they were brought to was their old work place. Many familiar-looking faces seem surprised to see their former associates. Taka and Yuji are even more surprised to learn that Bitoh, a bank robber they caught 7 years ago, broke out of prison. It seems that Bitoh is the one who attacked them earlier. Taka and Yuji, along with the young cops, Mizushima and Kanuma, go after Bitoh. They first visit Bitoh’s old friend Nishimura, who was now president of a venture company. A mysterious but beautiful secretary, Ryoko Misaki (Sachie Hara) welcomes them. Then, suddenly a bullet hits Nishimura. Another rifle shooting! Bitoh’s revenge has just started. Ryoko was a secretary of one of Bitoh’s partners. Not wanting to lose any more beautiful girls from Yokohama, Taka and Yuji heat up even more to protect Ryoko. Repeated revenge attacks, a missing nuclear bomb, and the deepening mystery. Can the two save the day? But on the other hand, who else but Taka and Yuji can save such a day like this?