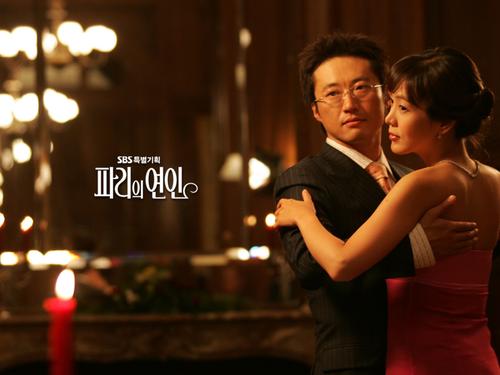 As the chairman of GD Motors, Han Gi-Ju (Park Shin-Yang) is a divorced man working in Paris. He takes Gang Tae-Young (Kim Jung-Eun), who is working as a housekeeper at his home, as his date to a business party. She is a poor international student who is chasing her father's dream of studying in Paris. Han Gi-ju's nephew, Yu Soo-Hyeok (Lee Dong-Geon) meets Tae-Young by chance, and falls for her.

Tae-Young ends up returning to Seoul, soon after, Gi-Ju and Soo-Hyeok also return to Seoul separately. Tae-Young asks Gi-Ju for a job and in time, the two fall in love. Gi-Ju's father tries to force his son to marry Moon Yun-A (Oh Joo-Eun) the daughter of an influential politician and she exhausts every means to make this happen. As the family secret involving Gi-Ju's and Soo-Hyeok is disclosed, the relationship between Tae-Young and Gi-Ju is in crisis.

jinjoo Jun 06 2019 7:06 pm this is my no. 1 kdrama of all time and the drama that got me addicted to kdramas and to the point i traveled to south korea to see their beautiful country! yes i'm also rewatching this and it's 2019 already; i stopped counting how many times i've watched this drama and everytime i do/did i still cry with those poignant scenes with tae young, soo hyuk & ki joo! These three actors became my all time favorite & i still follow their projects. I was also hoping for a sequel but unlike some of you I would like to see tae young & ki joo raise their family and be accepted completely by his grandfather/father and his mother! I feel for soo hyuk for not being the one that tae young accepted because he was always there for her from the first time they met with her bike being broken, the pipes in her place and lighting fixtures got buster soo hyuk fixed it too hence when she did not return her love for him he was understandably heartbroken! funny how the brothers are so alike even their mother said so, even their tastes in women for that matter! Ki joo's style in courting women was quite unique, i'd say he was not very good in the courting dept as tae young sometimes even coaches him for instance when opening the car door for her, etc. but he's so charming & caring too in his own way! I love how he defended her in front of his grandfather & willing to face any consequences for that matter! The two brothers love each other so much & love the line of ki joo in one of the episodes (this was after he punched soo hyuk one day) and ki joo told tae young that he hurt someone (soo hyuk) but it's him who feels the pain; he truly love his young brother & these two were so close but ki joo won't give up tae young at all even if he loses him or the GD motors! i'm sorry but i just can't get over this drama albeit it's 15 years ago already, how time flies!

i must say every scene in this drama was captivating indeed, when i first watched it, i didn't want to stop until wee hrs of the morning! I invested a lot of money to even purchase the whole set of dvd which i watch over/over again! I just can't get tired of ki joo, tae young & soo hyuk! so many heartwarming scenes and even now i still cry with them! the writer of this drama should be commended, it was really great drama but surprisingly it didn't get the best drama award that year, but the actors did and they all deserved it! the OST was beautiful too & i can go on & on with this drama!

@pen i agree with you & you took the words off my mouth in most of your review about this drama! btw you can try yesasia if they still carry this. I bought the orig dvd & it's worth every penny! Lee dong gun is now married with a daughter who's about 1 yr old and Kim (tae young) got married also i believe 1 1/2 yrs ago! As we both know Park has been married for a while now & has a daughter! (look on youtube for some of their videos so you can get some updates on them)

"Lovers in Paris" is my all-time favorite South Korean TV series that I watch over and over again! Oct 17 2018 2:50 am The three leading characters' acting proved very credible and effective in getting me hooked to this series so much so that it's now 2018, yet, I still watch it again and again. Although the theme of the story is common, poor woman falling in love with a rich man and vice versa, the writer injected many exciting elements that make the drama worth-watching. I could relate and empathize with each of these leading characters whose love brought out clearly that indeed "love conquers all." I was hoping that there would be a sequel. If I were to write a sequel, I would give Lee Dong-gun who played the role of Yu Soo Yeok a great opportunity to be chosen by Tae Young. Why? Every time Tae Young faced a trial or crisis, he was ready and willing to help and support her. It's not difficult to fall in love with him or learn to love a man like him whose love for Tae Young had made him a changed man despite his past mistakes and "happy-go-lucky" attitude.

Where are the leading characters of this drama now? Are they still acting? Do they already have a family? I know that Park Shin Yang is already married. I would like to buy a DVD of the entire series because my own copy has become defective due to my watching it repeatedly. Would you know where I can buy it?

Dc Jan 21 2017 11:10 am I remember this kdrama..i think i was 13 years old when this kdrama aired in the philippines..salute to this.!Just wondering whats the real ending though.it was confusing back then...hahaha likewise.how i saved-up my allowance just to buy copies..hahaha i think this the culprit of my addiction in kdramas..it all started this masterpiece hahaha

Diane Dec 25 2016 12:56 am There is no nice way to say this. I have watched at least 50 Korean Rom-Coms, and I really enjoy them, but this was a bust. Boring, nonsensical writing, and slim plot. The only saving grace was Park Shin-Yang, who aced his role as the lead male. "Cute, dumb and clumsy" for the lead femme lost me after Ep3, and had me tearing my hair out after that. The stupidity of Kim Jung-Eun's character was overwhelming...not to mention, there is a very nasty word for women who lead on a male that is hopelessly in love with them when they have no intention of reciprocating. Speaking of which.. the brother, Yu Soo-Hyeok, is temperamental, spoiled and psychotic, and a complete turn-off for a Rom-Com. I don't understand the rating. I barely stumbled through this one.

Ming Jan 27 2016 10:45 pm One of my favorite k-drama of all time. I can watch it over and over again and don't get tired of it. The best combination of perfect cast, script, and production.

Baesr Jun 29 2015 5:45 am If youll ask me if how many times did I watch this drama, I say my fingers through my toes are not enough. Thats how amazing it is. And sorry but this is still the best melodrama/romcom ever. Nothing beats the charm it has from beginning toi end, from its elemets down to its single thing. the ending? Its the most unique and if youve followed it thoroughly, you will inderstand its meaning. Saw this in 2004 and now its 2015, Im still not tired.

Gasenadi Feb 22 2012 7:24 am The "family secret" is what kept me coming back to this drama just to see how it played itself out. Also fascinating was the similarities between politicians, chaebols, and gangsters. Wow.