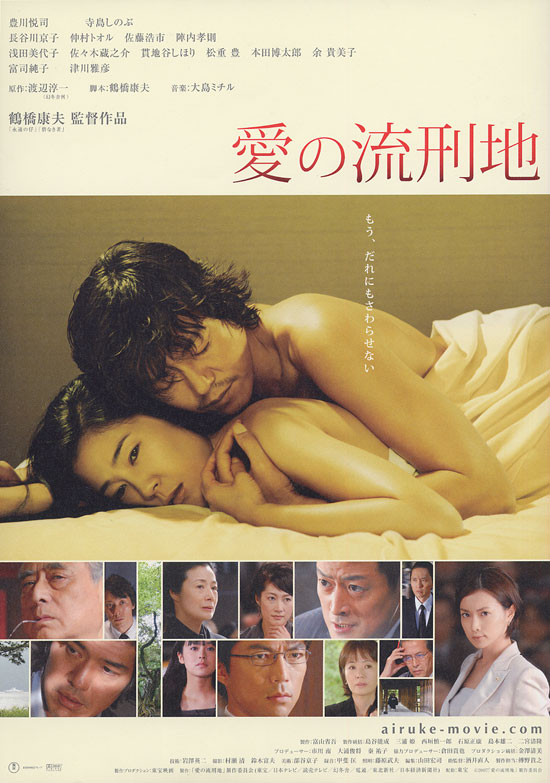 He is Kikuji Murao (Etsushi Toyokawa), a former best-selling novelist who has had a decade-long dry spell that has reduced him to university teaching and magazine hackery. After divorcing his wife (Reiko Takashima) and leaving behind his teenage daughter (Shihori Kanjiya), he meets Fuyuka Irie (Shinobu Terajima), a housewife and mother of three who is a longtime fan.

Murao immediately senses the passionate heart beating beneath Fuyuka's demure exterior and is irresistibly drawn to her. Their first date begins during a summer shower, with an impulsive, lingering kiss under a giant, rain-soaked tree. They then retire to a room in a classy hotel where they make bed-shaking, life-changing love.

Why are two hearts so obviously meant for each other torn apart only one year later? The film, which begins with Fuyuka's death, soon shifts to Murao's arrest and trial, while telling the story of their affair in flashbacks -- and answering the question of its tragic climax with a simplicity ("true love has its reasons") that comes to seem disingenuous.

Prosecutor Miyuki Oribe (Kyoko Hasegawa), a hot-blooded number in tight skirts and cleavage-revealing tops, understands Fuyuka's choice immediately. Despite his battered angelic air, Murao is, to her appraising eyes, a big hunk of burning love that makes her own former partner in adultery look like a wimpy loser. Jealous of what she can never have, she decides to tease and torture the helpless Murao until the hangman slips on the noose.