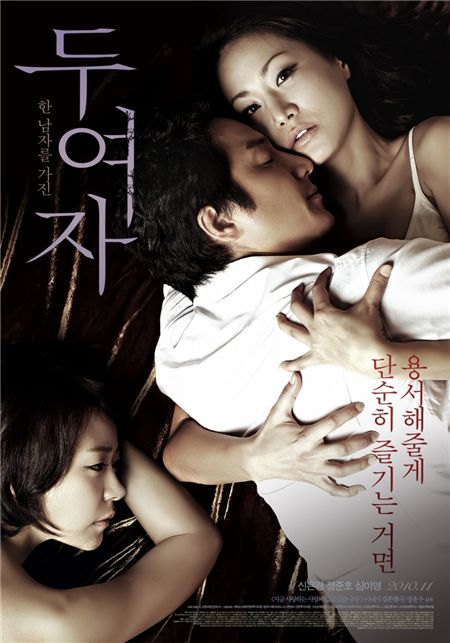 "Love, In Between" centers around a woman who discovers that her husband is having an affair. Prior to this, the couple were nearly perfect and the movie reflects the choices one might make in such a situation.

University professor Yun Ji-Seok (Jung Joon-Ho) loves his wife, but also cannot give up his new love. So-Young (Shin Eun-Kyung) works as an obstetrician and is the wife caught in the middle. After she discovers her husband's affair with a student named Su-Ji (Shim Lee-Yeong), So-Young embarks an elaborate to befriend the woman. When So-Young meets Su-Ji she experiences varying emotions from wanting revenge to sympath ...

LAPM Jan 28 2013 12:02 pm I agree with Spicytofu. I will say that I don't find fault with the casting process here. What I did find a little aggravating and annoying as heck was the hackneyed storyline about the "mistress" falling apart when he calls it off. Oh and the banshee bawling <--- which I find even more inexcusable. If that was supposed to whitewash Miss Shim as some sympathetic soul, it did the complete opposite for me. Perhaps bawl offline or make it an implied process but the incessant crying out loud between such films and those in Kdramas, are complete waste of screen time. It's like hearing preschoolers cry for attention.

Jeong Jun-Ho... I've seen him twice over and I don't know if he has become typecasted as this superbly handsome cad. I had seen Love In Between on Netflix back in 2011 before I discovered IRIS on Hulu Plus a month ago. In both roles, he is both unforgivable but memorable. Looking forward to seeing more from him. Hopefully, not as a rake but someone likable.

Julie Nov 20 2012 11:47 am Lmao at "Altough I have seen stupid men fall in love with ugly women when their wives at home are beautiful and nice. It annoys me to no end,!"

spicytofu May 31 2012 11:36 pm This movie had an unexpected ending, which made it interesting. I thought the very close relationship between the doctor (wife) and the student (mistress) was very unrealistic. But it was still a good movie nonetheless.

Re: Barney. "Although I have seen stupid men fall in love with ugly women when their wives at home are beautiful and nice. It annoys me to no end."

Well, dude, have you ever thought maybe there is no such thing as a perfect marriage where everything looks so great? Why would it matter if their house was beautiful and nice? People can have mistress even if they lived in a ghetto. And the woman was not that ugly; she was attractive enough. She had spunk, a liveliness to her, and she had courage to stand up against the professor when he reprimanded her. The professor was attracted to her for this reason. Life is not all about beauty and being shallow.

barney May 22 2012 7:31 pm Hated this movie. Why.? Because the woman who plays the mistress is so ugly that the story is unrealistic. Altough I have seen stupid men fall in love with ugly women when their wives at home are beautiful and nice. It annoys me to no end,! Who the heck wrote this s story anyway!

Consus Feb 04 2012 3:46 am It was a really good movie. However, I cannot look at Jeong Jun Ho the same way. The three actors were good and made this twisted love story interesting to the end.