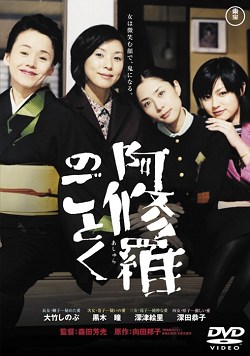 The "Asura" of the title refers to a Hindu goddess whose beautiful face belies her tempestuous nature. In the film, the first Asura-like character we meet is the excitable Takiko (Eri Fukatsu), the third daughter of the Takezawa clan, who calls her three sisters together for an emergency meeting. Her big news: Their father (Tatsuya Nakadai) is seeing another woman, whose 10-year-old son may be his love child. The other sisters are skeptical -- until Takiko produces photos taken by a gormless private investigator she has hired. With the proof in front of them, they vow to never tell their saint of a mother (Kaoru Yachikusa).

The revelation not only brings the sisters together, but brings to the surface problems they thought they had hidden or buried. The eldest -- the widowed Tsunako (Shinobu Otake) -- is a flower-arrangement teacher who may look the soul of kimonoed propriety, but is having an affair with a married man. Meanwhile, second sister Makiko (Hitomi Kuroki) may seem to be living the Japanese dream with her salaryman husband and two adorable kids, but she suspects that hubby is cheating. Takiko, a librarian with the stereotypical glasses and prim air, is fading into spinsterhood until the detective, a socially inept type with comic facial tics, starts courting her. Her first instinct is to fend him off -- she is too much the eternal virgin to feel comfortable with any man, however harmless. Her second is to hide their budding relationship. Finally, family baby Sakiko (Kyoko Fukada) is shacked up with a hunky, thick-skulled boxer, but is not ready to tell her parents the truth.-- Japan Times