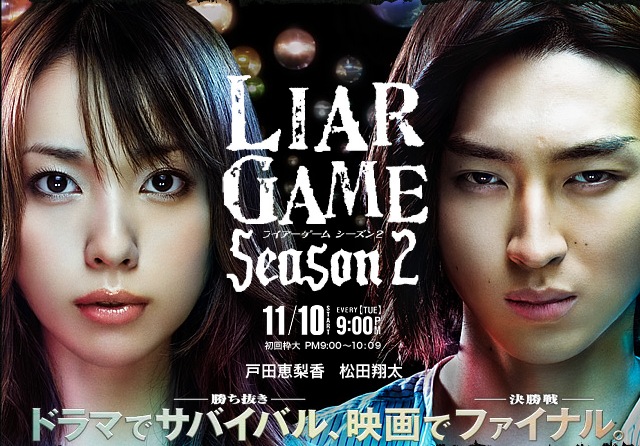 Although Nao and Akiyama had survived the third “smuggling stage” to make it through the “Liar Game” they were far from finished with the game…Unable to turn down the cunning invitation sent from a Liar Game secretariat, Nao finds herself playing the survival game of extreme situations yet again. On the other hand, Ellie, a woman knowing of secrets, comes in contact with Akiyama. And with that, another tale of fear begins.

rainer Dec 21 2014 1:55 pm uhm to Anneliese down at the bottom....sexual tension ? really ?? i don't think you really know what that is. I mean Toda Erika reminds me of a 10 year old girl in this drama, she acts way too naive....I don't think anyone is like that in real life unless it's a little kid. And Shota, oh well even if I would like the guy....there's absolutely no sexual tension to be found anywhere in this drama, neither season 1 nor season 2 I can't see where you're getting that from.... I watched both seasons and the korean version and I have to say I like the korean version better, here is just more suspense. Though I'm not sure if you really can compare them, the japanese version has more of a manga/anime feel while the korean version has more reality to it. Well I like both versions actually :)

btse Jun 01 2012 10:23 am does anyone know the name of that soft piano song that plays whenever nao chan opens up to the enemy?

Fairooz Feb 20 2010 5:30 pm This is a great series! I Love the first and second season. This is my favorite Japanese drama ever! Looking forward to the movie!

Anneliese Jan 29 2010 1:47 pm Matsuda Shota + Toda Erika + Psychological Games = Sexual Tension + EPIC-NESS! The first series was fantastic but the second series surpassed it. Wonderful actors and the clever writing. Top Recommendation! LIAR GAME 1+2 are two of my favourite series. And I cannot wait for the movie! That will be something to remember.