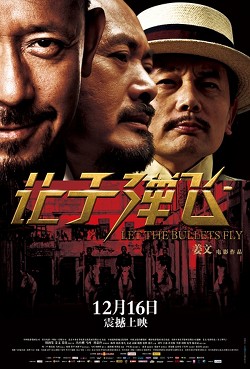 Set during the warring 1920s, Bangde Ma is (You Ge) is en route to become the new mayor for Goose Town, but his train is hijacked by notorious bandit "Pocky" Zhang (Wen Jiang). Unknown to Pocky Zhang, Bangde Ma is himself an imposter and hijacked the identity of the former mayor. Furthermore, the chameleon like Ma lies to Zhang that he is only the town's counselor Zhang. Meanwhile, Zhang, hellbent on making a fast buck, takes Ma with him and descends upon Goose Town under the guise of being the town's new mayor. Zhang soon learns that the town is under the rule of businessman Wang (Chow Yun-Fat). A deadly battle of wit then ensues with the three main participants attempting to dislodge each other from their seat of power.

peep Jan 09 2011 8:49 am I loved this film. So incredibly funny, though ok, it was exaggerated and cartoony at a few parts. Doesn't make it less funny though. Kinda reminds me of Stephen Chow's Kung Fu Hustle, but less ridiculous and more ironic and satiric. Jiang Wen, Ge You, Chen Kun and Zhou Yun were great. :)