L for Love, L for Lies

(Redirected from L for Love L for Lies) 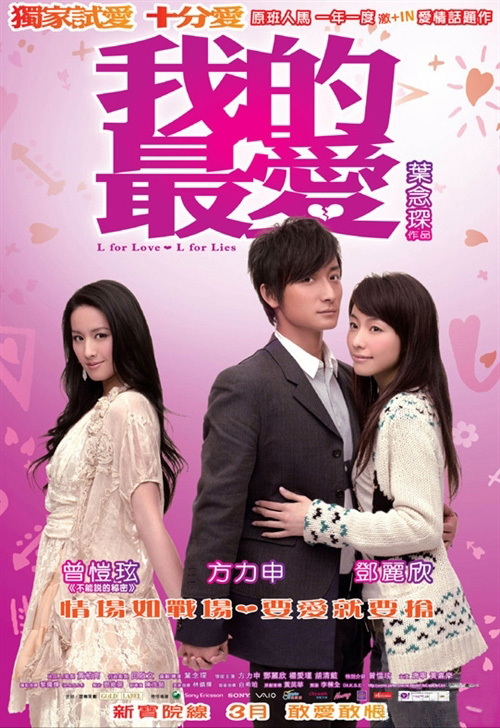 Stephy originally was a very lucky girl. She opened a sweets shop after graduating college with her longtime boyfriend Jun (it didn’t say the name of who is acting him). Stephy thought that after everything settled down, she would then marry Jun. But of course the good times never last long. One day Stephy met her old classmate Alice Zeng (Taiwanese actress, from Jay Chou’s Secret). Alice liked Jun’s hard working and nice personality, and completely not caring about Stehpy’s feelings; decided to take Jun for her own. Stephy not only lost the long time love of her life, but she also lost the sweet shop that she has worked so hard on.

Leila is Stephy’s good friend. She has a long time boyfriend Terry. The pretty and attractive Leila would often time have some short relationships with other men while concealing all this from the introvert and slow Terry. It’s not that Leila doesn’t love Terry. She always thinks that Terry will never leave her. As for Leila, she doesn’t want to be someone who holds onto one single relationship.

After breaking up with Jun, Stephy found a job as a make-up artist in the mall. Her boss Kuen (again, no actress name) suddenly announced her engagement. She invited everyone to out to celebrate. At the party, Stephy realized that her boss’s really young fiancé is very familiar. She recognized him as her old neighbor Alex Fong, but Alex keeps pretending that he doesn’t know Stephy.

A month later, Kuen’s wedding was suddenly canceled. Stephy found out from coworkers that Kuen’s life savings were all stolen from the fiancé Alex, who also disappeared. Stephy unexpectedly met Alex on the streets. Alex already has a new target. He finds Stephy following him. Alex though Stephy was going to sue him, but never expected Stephy to have a request from him. She would like to use good money and hire him to cheat with Alice. Stephy promised that Alice will have to taste what it’s like to loose all your money and boyfriend.

As an experienced liar, Alex successfully “wooed” Alice. Watching Alice like someone else, Jun decided to make up with Stephy and asked for a new relationship. But the time has passed for Stephy. She has no more feelings for Jun because deep in her heart, she unknowingly fell in love with Alex.

As for always having successful relationships, Leila finally felt tired and decided to set up a stable relationship with Terry. But Terry tells Leila that he wants to break up. In the past 6th months, concealing the fact from Leila had another relationship with his coworker’s girlfriend Miki. “Stepping on two boats”, Terry finally decided to let go of Leila and chose Miki for a new relationship. Always thinking that she was in control of everything, Leila never thought that she would be played. Who would have thought that this was all quietly building up?

Chrissy Apr 28 2011 4:07 pm The movie was good, the story line was good. Although, the ending really got me confused? I hoepe theres a sequal to this movie.

lily Oct 04 2010 5:14 pm omg! this sucked! it had a okay ending at first with alex changed but that turn was just stupid! but i guess once in a while a movie that doesn't have a good ending is good but i didn't like it. the movie made me cry so many times! it was sooo touching! :(

Me Aug 09 2010 11:32 am this was a great move! first movie ever to have the girl not go with the guy she really loves. the people are all hot btw XDDD

Lilou Jun 04 2010 12:06 pm I agree, I was so disappointed by the end. Even if the story was based on liars and not real love, I was really expected an ending more positive than this.

no one Jul 05 2009 8:32 am This is the worst ending in the history of the universe. I have never seen a crappier movie in my life.