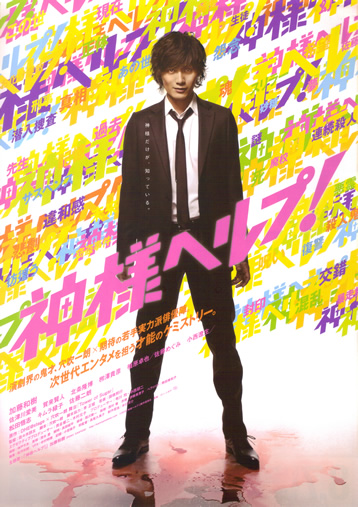 On August 12, 2010 a man runs into an abandoned school. Detective Fujimoto chases the man step by step. The young man hides in a class room, but right behind him is a female high school student covered in blood and holding her breath. Meanwhile Detective Fujimoto turns and screams when Detective Akaiwa calls for him.

Several cars of people arrive at the abandoned school "Satogakuin". They are "horror planners" who will convert the school into the ghost house "Tower of Sugar". To kill time staff members Atsuo Kazuki Kato, Nao (Aimi Satsukawa) & Gohashi (Kento Kaku) roam inside the school and feel a strange sense of familiarity.

Atsuo walks around by himself. He becomes stunned when he finds an old picture frame in an office. In the picture, a man dressed in a white outfit looks just like Atsuo. At that moment a mysterious blue hits Atsuo and he loses consciences. Later, employee of Fujimaya Land and chief of the horror planning team Noriko Kishima (Megumi Sato) arrives and meets the detectives chasing the serial killer, co-worker Asakura (Ryosei Konishi) and the now conscience Atsuo.

Atsuo feels something strange in his head. He starts to have visions of bodies and ghosts covered with blood and suddenly he goes back in time to August 12, 1985. On that day a Japan Air Liner crashed and Satogakuin teacher Sato Takashi (Kazuki Kato) goes on a murdering rampage. Sato Takashi was known as a kind and generous person, but his mind was taken over by an evil entity. That evil entity now tries to take over Atsuo's mind ... melanie Jun 26 2014 4:24 pm the movie's laughable because it's so horribly produced and cheap but if you're looking for another remarkably low-budget movie with cute actors (noting uehara takuya and kato kazuki) by all means watch the film just for their faces but you won't be in this for the actual movie.