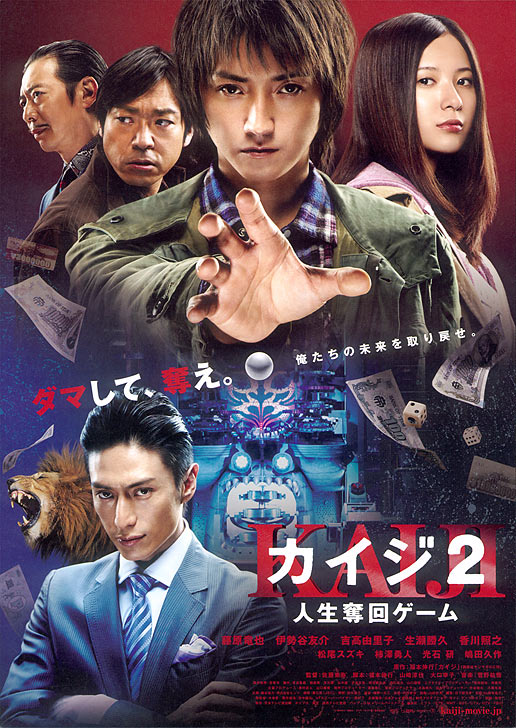 Kaiji (Tatsuya Fujiwara) erased all of his debts by successfully navigating through death-defying games one after the other. A year later though, he's back in the same debt ridden situation. Kaiji then gets a chance to clear himself of his 200 mllion Yen debt, but he has only 2 weeks.

Kaji then decides to take on the mother of all pachinko machines named "The Swamp". The top winning payout is over 1 billion Yen. "The Swamp" is controlled by an illegal casino operation named Teai. Meanwhile, Seiya Ichizo (Yusuke Iseya), controls the machine from a remote location to ensure the machine never pays out the jackpot . Kaiji recruits the help of Yumi Ishida (Yuriko Yoshitaka) whose father was killed by Teai, Kotaro Sakazaki (Katsuhisa Namase) a fired employee of Teai and Yukio Tonegawa (Teruyuki Kagawa) who lost his position at the hands of Teai. They all join Kaiji to take down "The Swamp," but their lives are at stake ... Arthur Jan 30 2012 5:25 pm Really enjoy these manga to film adaptations like "Death Note", "20th Century Boys", "Gantz", "Gambling Apocalypse Kaiji" and "The Incite Mill". I have the blu-ray versions for the aforementioned film franchises; incredible stuff! As far as Kaiji, I really enjoyed the first film and I can not wait to see "Kaiji 2". Hopefully it is released on blu-ray or even dvd soon. Tatsuya Fujiwara is an incredible young actor; as is Ken'ichi Matsuyama.

hilty&bosch Nov 19 2011 12:37 am I cannot wait to see this!!! I'm so excited to watch the good looking Iseya Yuusuke in another film! Fujiwara Tatsuya and Kagawa Teruyuki are great actors too :D

Oh, to those who knows about Yusuke Iseya, please do MAIL ME at sayuri87@mail.com. thanks!!!

Ichijou can't be this handsome, she should be more girly!!

Is that old man with moustache, Sakazaki?

Yumi Jun 25 2011 11:45 am Yes, she is his daughter. In the trailer she says: They killed my father. So I guess she goes with Kaiji to compete in a new game to get revenge for her father.

Anyway, Iseya Yusuke looks so hot in this movie hehee ^^

Helen Yates Jun 18 2011 7:11 am If you watch the first movie, during the Brave Man Road challenge Koji Ishida gives his coupon to Kaiji and tells him that he has a daughter working at a panchinko parlour and to give the money to her when he cashes it. At the end of the first film, you see Kaiji go to said parlour and leave some money for a young woman. In the manga/anime, Ishida has a son who is underground with Kaiji but with the way she talks and the flashback to Ishida, I have a feeling that this could be Ishida's daughter. I don't know much Japanese to follow but I have a small feeling she could be a combination of Ishida's child and Mikoko :-)

Helen Yates May 28 2011 1:32 pm Ohhhh I see they are adding the Chinchorin arc but in the film, they showed him with a clear debt in the end of the first film and he has already been down underground mines.....love to know what brings him back down to the underground....