It's a Beautiful Life - Irodori 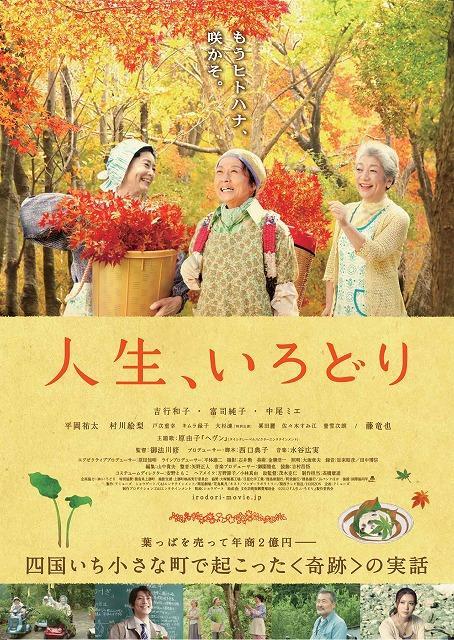 Set in in the small town of Kamikatsu, where 48% of the population consists of the elderly, a group of elderly women come together to sell vegetable leaves.

Since the tangerine industry collapsed in Kamikatsu, the town seems to have slowly withered away. Eda, who works at National Agricultural Cooperative Federation, tries to boost give the town a boost. Eda's plan is to sell vegetables leaves from the area. Residents do not like the idea, but 3 women stand up for Eda's proposal. Even though Kaoru's (Kazuko Yoshiyuki) husband strongly opposes her, for the first time in their relationship, Kaoru goes against her husband and she accomplishes her will. Angela Vogt Nov 14 2018 7:10 am I thoroughly enjoyed watching Irodori (screened in South Africa courtesy of the Japanese Embassy). It is certainly inspirational and also teaches one more about the Japanese culture and beautiful countryside. It's great to recognise some Japanese words too.

AJ Basa Jun 17 2015 10:15 pm This movie is amazing an inspiring it gives me hope for my future and many more it was quite saddening too and my heart hurts and there's that lump on my throat I hope I never forget this amazing movie

Ronald Frias Nov 01 2014 1:03 am Yes I agree with you Eksam Lloren, It's a very inspiring movie. Like you I just finished watching it here on cable TV through RED channel. It is based on a true story on how they started a multi-million bussiness plus the lessons in life you learn about family, love, passing your legacy and teaching the next generation the values that they need to learn from the older ones.IRODORI mean colorful leaves

Eksam Lloren Nov 01 2014 12:08 am It's a very inspiring movie. I've seen it on cable tv through RED channel. It's once in a lifetime to see this wonderful movie. You can feel that it's indeed you can have a wonderful and beautiful life if you make your dream come true despite the hardship and difficulties you encounter along the way.