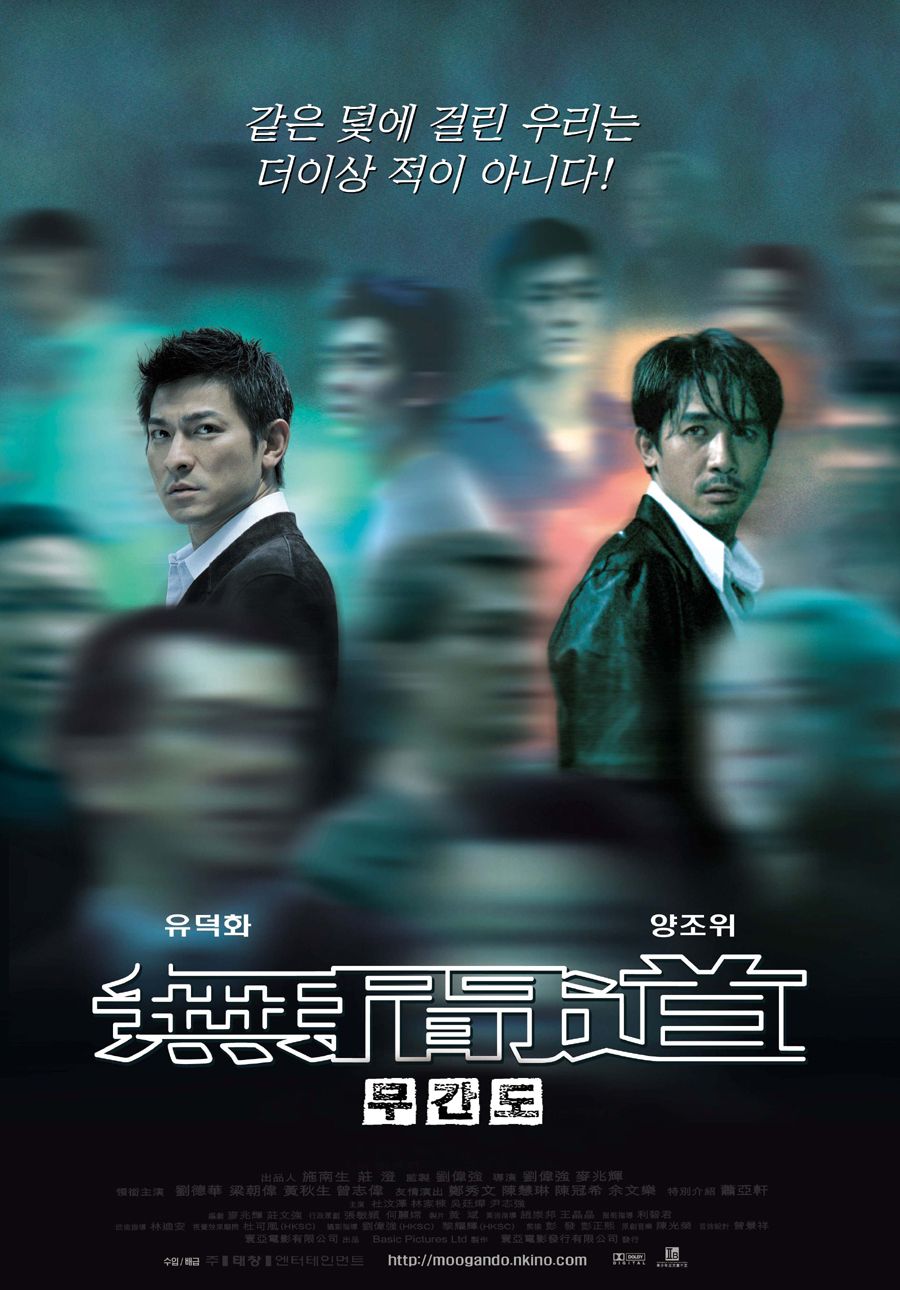 Sammy, the leader of the Triads, indoctrinates his newest class of recruits. These new members were picked because of their impeccably clean records and soon will head out into the violent world of the Hong Kong Triads. Lau is one of the brightest of this group and is personally chosen by Sammy to infiltrate the Hong Kong Police department.

When Lau joins the training academy for new police recruits he goes through vigorous training sessions. The leaders in the police academy picks out another new recruit, Yan, as being the best of the bunch and Yan is soon sent to infiltrate the Hong Kong Triads.

Ten years later the police, led by SP Wong, are closer than ever in arresting Sammy and his Triad group. The mole that the police planted within the triad organization, Yan, has now moved up within their ranks to become one of Sammy’s most trusted henchmen. Sammy and his gang are set to complete a deal that night with a group of Thai drug dealers. As the drug deal starts to take place, Yan the undercover police officer, taps morse code into a hidden microphone for SP Wong to hear. As SP Wong gets Yan’s messages, SP Wong orders his group of police officers to take the appropriate actions. Unknown to everybody, except Sammy, the mole that Sammy placed into the police organization, Lau has now worked his way up in the police organization and is now part of SP Wong’s police task force. While, Yan, relays real time information on the drug deal to SP Wong, Lau relays real time information to Sammy. A deadly game of cat and mouse occurs as both sides discover that there is an informant in each of their groups.

1) Lau wasn't the observant one, Yan was. It's doubtful you'll remember a face in a sea of thousands. Perhaps a glimmer of recognition but that's it. Besides, as far as Lau knew, Yan was expelled from the police academy; he could have thought he'd gone bad.

2) I'm no audiophile, but I'm sure there are those out there that would be able to hear a difference.

3) This one might be a stretch but at this point Yan probably suspects that Lau has no intention of returning his identification (seeing as how Lau's a mole). It was a stupid decision to make, running out of there but perhaps his years as a gangster instinctively told him to run.

Ki Feb 16 2011 6:37 am I have seen Infernal Affairs countless of times and the movie just happens to be one of the best cop thrillers ever made. Credit goes to director Andrew Lau for coming up with such an impressive movie. His movies are usually very commercial films that at times emphasizes style over substance. Fortunately, Infernal Affairs is his best film, that is loaded with tension, drama, and substance.

The most compelling aspect of the film would be the psychological war of wits between SP Wong (cops) and Sammy (triad), as well as the psychology war between Lau (mole planted into the police department by Sammy) and Yan (mole planted into the traid group by SP Wong). The scene where the drug deal takes place with the cops eavesdropping on their drug deal and the Triads eavesdropping on the police was brilliant! The manner in which each side used their mole to figure out what the other side would do and their counter moves was one of the more thrilling scenes I have personally witnessed.

The other compelling aspect of Infernal Affairs would be the character study into the mindset of each of the moles. Tony Leung (In The Mood For Love/Chungking Express/2046) was remarkable in playing the mole that carried the psychological scars from working undercover in the Traid organization for over 10 years. His yearning to regain the normalcy of a “regular” life was one of the many compelling sub-plots in Infernal Affairs. Andy Lau, was nearly as good playing the undercover mole planted by the Triads into the police department. Lau also suffered from his own personal “demons” that was not as apparent because of his calm, always-in-control demeanor. Yet, beyond his external appearance, he was torn between serving his mentor “Sammy” and gaining respect from his peers in the police department, as well as from his fiance named May. Perhaps in a subtle nod to Kar Wai Wong’s “Chungking Express,” a movie that Tony Leung starred in, Andy Lau’s character had the first name of “Ming” and his fiance in Infernal Affairs was named “May.” The first half of Chungking Express centered around a love struck police officer named “Ming” who was recently dumped by his girlfriend “May.”

As good as Infernal Affairs is, the movie still suffers from a few lapses in logic as well female characters that seemed to have been written into the script as after thoughts. Some of the moments that made me scratch my head in wonder: 1) in the opening sequence Lau watches Yan as he leaves the police academy, moments later he is shown fingerprinting Yan after the police arrested him and his fellow gang members. How did Lau not recognize his fellow former police academy member? 2) Years later, when Yan and Lau meet randomly in a stereo shop, Yan recommends an expensive tube amplifier and a pair of esoteric speaker cables. They then audition the setup by listening to a song featuring just a female vocalist and no musical instruments. Extremely far fetched to believe they could decipher any qualities from that amp and speaker cable, beyond tonal qualites, with just a female vocalist singing. 3.) Towards the end of the film, when Yan watches Lau through the glass window in the police department, Yan makes a startling realization about Lau. Inexplicably Yan leaves immediately and does not wait for his file to be returned. WTF?

Regardless of those few minor quibbles, Infernal Affairs ruled and the film was simply breathtaking throughout its 101 minute run time. The film is tastefully stylistic, with a thrilling script that will impress you as much as the performances of the star studded cast. Check this one out and see why it inspired Scorsese’s The Departed.