I Am Happy - Korean Drama 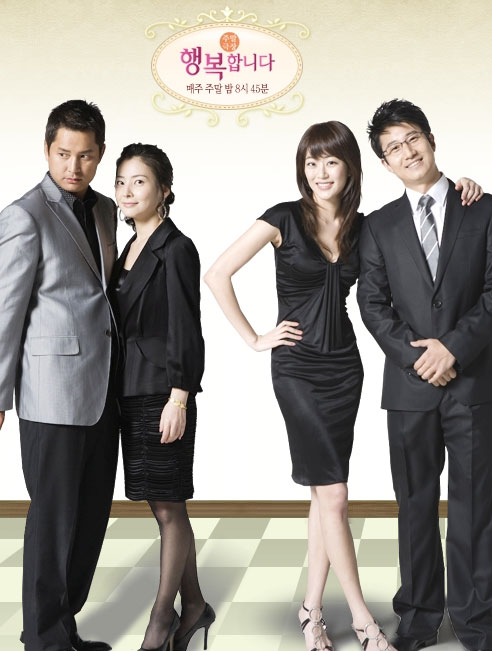 Seo-yun(Kim Hyo-jin), the Chairman of a top Korean conglomerate’s oldest daughter, is dating Joon-su(Lee Hun), who is impervious to this fact. At the end of the year, she is forced by her mother to go on a family trip to Hong Kong. Unbeknownst to Seo-yun and due to a fateful car crash suffered by his manager, Joon-su is also in Hong Kong, accompanying the Chairman of his company, who happens to be Seo-yun’s father! The two finally run into each other at a dinner party, where Joon-su tells Seo-yun that they must end their relationship because of the social class differences between them. Meanwhile, Seo-yun’s younger sister, Eae-da(Lee Eun-sung), finds herself in trouble while walking the streets of Hong Kong alone after the dinner party. Kang-seok(Ha Seok-jin), a K1 fighter who is in Hong Kong as a last minute replacement for an undercard bout, comes to her aid. After being rescued, Eae-da can’t help stop thinking about her new hero. Following the trip to Hong Kong, Joon-su does his best to avoid Seo-yun. While feeling a jilted, she decides to barge in on him at his family residence, where she goes about behaving like a daughter-in-law. Giving way to her persistence, Joon-su makes up his mind to marry Seo-yun. However, Seo-yun’s mother, Se-young Lee(Lee Hwee-hyang), pesters her constantly, trying to disturb the relationship. Seo-yun also must reconcile Joon-su’s refusal to accept any assistance from her family. Under these circumstances, Seo-yun begins her married life in Joon-su’s family residence.

Pompy17 Jun 06 2016 6:12 am The series is very entertaining,warm and has a very interesting characters. At the beginning was a bit boring, but later becomes more interesting. But I hate the writers for what they did to my favorite couple Ae Da & Kang Seok  :( However, I recommend this drama.