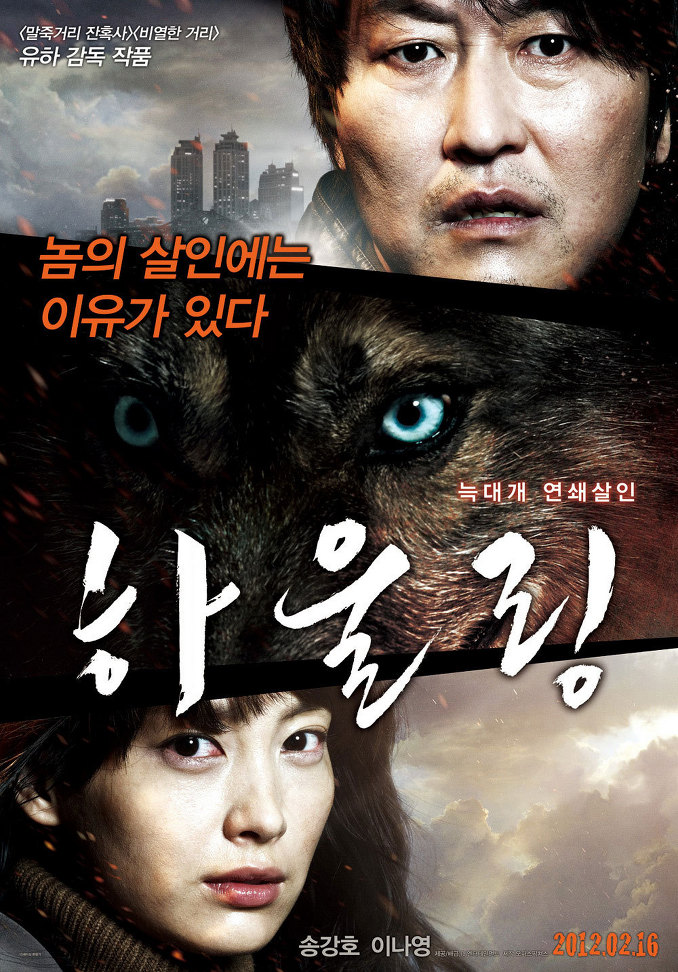 A man is found burned to death inside of a car. Detective Sang-Gil (Song Kang-Ho) and his co-workers investigate the scene. Sang-Gil doesn't want to take the case, because it looks like a simple suicide case and won't help him get the promotion that he desperately wants. Furthermore, rookie female detective Eun-Young (Lee Na-Young) is selected as his partner for the case. motoradhermes Jan 01 2017 8:00 am Movie was kinda disappointing... Basically it is about a series of revenge murders carried out by a 'wolf-dog' hybrid. The title "howling" has very little/nothing to do with the movie's plot in case you're wondering.

What you can expect are: weak character development, poor detective plots, fast paced movie that is all over the place, and good actors in a rather mediocre movie...

There is really nothing that was special about the movie or anything noteworthy about it. The movie still manages to entertain despite being ordinary. I wouldn't recommend this movie to anyone as there are a lot of detective crime movies that are a lot better than this one.

Jae Sep 14 2012 1:58 am When you read the title 'The Howling' you assume it would be a movie with werewolf themes to it. It’s actually a tragic tale about a wolf-dog turned 'killer' (spoiler: he was actually a total softie) in a revenge plot against the horrible people (criminals) who hurt the trainer’s daughter, whom the animal adores. The female officer develops a connection with the animal also. In the end he meets an unjustified end (spoiler: death) while attacking his final victim (the criminal who assaulted the girl) by the officer’s partner.

Gasenadi Mar 05 2012 2:11 am This is on my list because I reference whatever Ki critiques. Ki had mentioned how great Song Kang-Ho is, so naturally... I'll watch and arrive at my own conclusions, but as a new arrival to Korean entertainment, I just want to thank Ki for the film reviews. They've helped me make better selections. Saludos desde Puerto Rico.

anna Mar 04 2012 5:31 pm Such a dramatic trailer hunting for a ..wolf-dog? I don't know why but it made be laugh. I think it would be more interested if it was a werewolf.

Ki Feb 25 2012 11:53 am Watched Howling twice here in South Korea and both times left disappointed. The movie shows promise in the early portions and there’s the tantalizing pairing of Song Kang-Ho and Lee Na-Young. The storyline also seems to have a lot of promise, especially since I’m not familiar with the original novel or the Japanese TV drama versions, so I had no idea where the story would go.

Sooo … what exactly disappointed about the film you might ask? The movie builds up as a mystery involving two police officers investigating a chain of deaths. This part is ok and teases that the movie might turn out really good. Once the mystery starts to unravel, this is where “Howling” sinks deep into mediocrity. The wolf-dog element turns out not all that exciting and the lengthy shots of the dog sprinting across a field or highway felt flat or boring even. The criminal elements also has a paint-by-the-numbers feel and the main person behind the mystery just doesn’t seem all that believable. On top of all that, there’s a daughter in the movie that is crucial to the story and her performance is just plain awful.

Meanwhile, Song Kang-Ho playing a low level cop on a murder trail certainly recalls “Memories of Murder,” but, obviously, not nearly as good or having the element of surprise. The first time I watched “Howling” I felt Lee Na-Young might have been miscast for her role, simply because she is such a beautiful woman. The second time watching the movie this aspect didn’t cross my mind as much and I enjoyed her performance more the second time around.

I wanted to like “Howling,” but the movie turns out to be a really mediocre film. Certainly, some people will like this movie more than myself and hopefully I won’t discourage those folks from seeing the movie. For myself, if the movie’s entertainment factor could be shown in graph form it would show a gradual descent from high to below average.