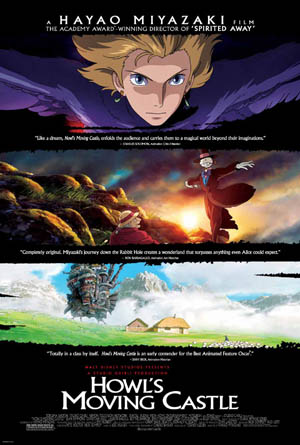 Sophie, an average teenage girl working in a hat shop, finds her life thrown into turmoil when she is literally swept off her feet by a handsome-but-mysterious wizard named Howl, and is subsequently turned into a 90-year old woman by the vain and conniving Wicked Witch of the Waste. Embarking on an incredible odyssey to life the curse, she finds refuge in Howl's magical moving castle where she becomes acquainted with Markl, Howl's apprentice, and a hot-headed fire demon named Calcifier. Sophie's love and support comes to have a major impact on Howl, who flies in the face of orders from the palace to become a pawn of war and instead risks his life to help bring peace to the kingdom.