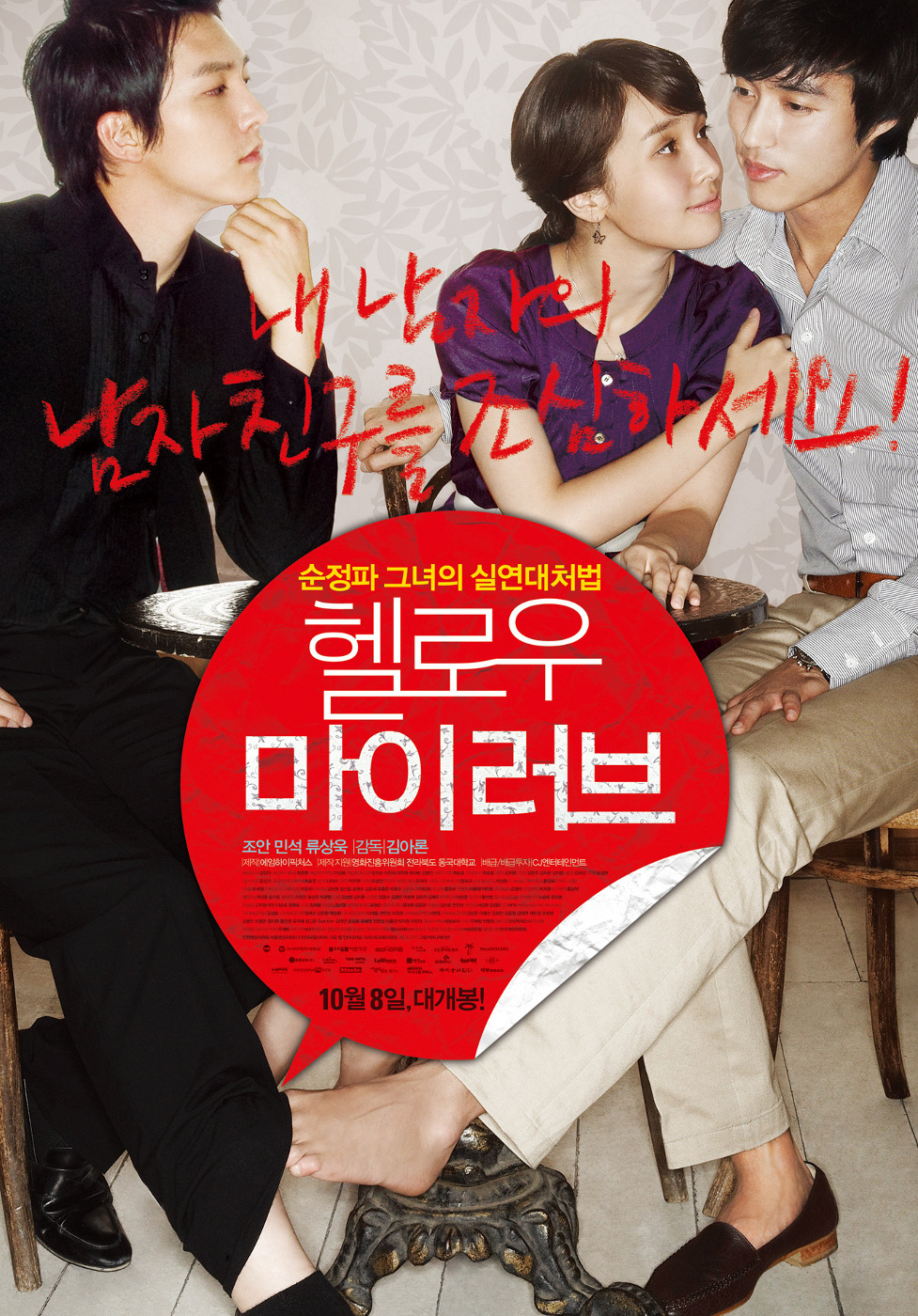 Hyo-Jung (Jo An) works at a radio station as a scenario writer and DJ. Her boyfriend of ten years Won-Jae (Oh Min-Suk), promised to marry after he returns from his studies in France. When Won-Jae returns to Korea he brings along another man named Dong-hwa (Ryu Sang-Wook). Hyo-Jung then discovers Won-Jae and Dong-Hwa's relationship is more than platonic ... There were a few things I found problematic with the film. Ho-jung's behavior was so embarrassing. The things she would say made me cringe numerous times. From the beginning where she would dispense TERRIBLE ADVICE to her radio listeners. To her rant about winning back Won-jae. Especially that ludicrous comment about the "broken tv". Won-jae and Donghwa being gay isn't something that you can FIX by "meeting the right woman". And there's an absolutely ridiculous scene where Ho-jung drunkenly molests Donghwa who had just finished telling her that he can't sleep with women, and then Donghwa then suddently becomes a willing participant, as if to further underscore this incorrect belief of "fixing gay men" that's prevalent among those who have underdeveloped attitudes about LGBT issues.

I'm not saying that gay men that having sex with a woman cannot occur. Sex feels good for most folks, and heterosexuality/homosexuality exist on a wide continuum. It's not a dichotomy. There's areas where you may be sexually and emotionally attracted to one gender, but merely emotionally attracted to another, and many other variations to boot. With Won-jae this is hinted at when he says he "feels confused", implying he could be bisexual/pansexual/etc. However Donghwa explicitly says that he's doesn't want to sleep with women. Not even 10 seconds later The only way it makes sense is if Donghwa falls into the spectrum where Kinsey's 4 or 5 might be.

However, presenting this, without explanation, to audiences unfamiliar with critical LGBT terminology and social advocacy vocabulary and no academic context for understanding it, (not to mention the misguided premise of the "right woman" that turns gay men straight) will only serve to propagate misinformation and harmful ideas about LGBT folks. The only marginally redeeming factor was the depiction of how futile the exorcism was, and how it showed the archaic and outmoded mentality of the old world on this topic.

Also, by the time this movie ended, I absolutely hated Charles Trenet's song "La Mer", known among English audiences as "Beyond The Sea" performed by Bobby Darin. The song would play ad nauseum, (whether the original, or a glib, whimsical piano version) especially during Ho-jung's facepalm moments, and Won-jae and Donghwa's "out of character" inconsistencies. I have no problem with the song itself, but hearing the same musical cues over and over again paired with cringe-worthy scenes absolutely ruined the music for me by the time the film was over.

I was also annoyed that they felt the need to make the non-conventionally attractive Jin-young a lesbian. Why? Because if you don't look like a porcelain doll like the other women in the cast, you must be a lesbian? AND THEN THEY PLAYED CHARLES TRENET'S "LA MER" AGAIN.

Very problematic film that provides little to no insight into realistic LGBT issues.

However if you're interested in merely being entertained with a film that uses being LGBT as a gimmick to provide a trite twist into the standard love triangle trope, then go ahead and check it out.

koreanong peke Jul 30 2014 12:55 pm i just watched it now, good acting is very natural..story i can easily relate with..i like the ending more power to the director, staff and crew :)

And to Minyoung, you can easily find this movie in youtube.

Sorry for my poor english, my language Is french!