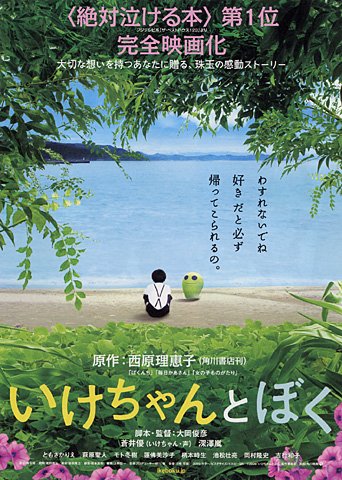 Based on the heartwarming debut picture book from well-known manga artist Saibara Rieko (‘Everyday Mom’). Popular child actor Fukazawa Arashi (Helen and the Baby Fox) stars as a boy who enjoys an affectionate relationship with the strange little creature Ike-chan in this touching drama. Good Bye, My Secret Friend marks commercial director Oooka Toshihiko’s feature film debut, for which he also wrote the screenplay. Able to change color and shape at will, Ike-chan is warmly rendered with the latest CGI techniques, creating a fantasy world touched with the bittersweet pain of real life.

Yoshio (Fukazawa) is a very impressionable 9-year-old boy who’s always accompanied by a strange little creature named Ike-chan (voiced by Aoi Yu) that only he can see. Ike-chan comforts Yoshio when he’s bullied at school and gives him courage when he’s scared of being alone at night. On the other hand, when Yoshio becomes friendly with girls, Ike-chan turns bright red with anger. Ike-chan helps Yoshio overcome the problems of childhood, but as Yoshio gets older Ike-chan gradually disappears from sight. -- j-pitch.jp

hosting Jun 20 2013 7:36 am The following coupons are currently available and you can use it to avail the discount instantly. These only test the patience of people who are looking for your website. 94 off coupons are offered by hostgator and this is one of it.

I thought I signed up for a cute children's film about the peewee adventures of that boy from Goemon and an imaginary green blob. Little did I know, Ike-chan to Boku is actually about mortality. It's also about childhood crushes, monsters in the closet, family fights, neighborhood bullies, and growing up, but what's felt the most strongly throughout Ike-chan to Boku is the way life and death come seeping too early into the consciousness of the stubborn young hero, Toshio (Fukasawa Arashi).

Fortunately, Toshio has a trusty friend in Ike-chan, a roly-poly CGI blob that only he can see. She changes colors with her mood, but most of the time she's a bright shade of flubber green dotted by two large eyes and a mouth. Ike-chan is the kind dispenser of wise words and receptive ears during Toshio's toughest times as he gets pummeled by bullies and deals with family tragedies and disillusioning revelations. She also keeps the monsters away at night. The kicker: she's voiced by Aoi Yu. Where can I get myself an Ike-chan?

Even with Ike-chan inexplicably around, the film offers a fanciful yet realistically bittersweet account of a boy's childhood, dotted with wonders, tears, and road bumps. Fukasawa Arashi is a talented kid, embodying the chatty, bratty, precocious Toshio through juvenile episodes and also serious life-changing moments that would go over most children's heads. The short scene in which Toshio suddenly grows up for his father's funeral is a real heartbreaker.

Where the film departs from the expected is when the truth behind Ike-chan is revealed, in the process drawing on a whole Eastern belief system about life and death and also appealing to our sappiest conceptions of love, time, and fate. The reveal is so matter of fact that it comes across as clumsy, but the heartfelt message is nonetheless there, especially since it's Aoi Yu doing the talking. Ike-chan to Boku rights itself at the end with a strong final image, a pang of both hope and sadness about growing up and leaving childhood behind.

to see this review, visit http://www.yesasia.com/us/yumcha/good-bye-my-secret-friend-dvd-english-subtitled-hong-kong-version/1022986603-0-0-0-en/editors-pick.html