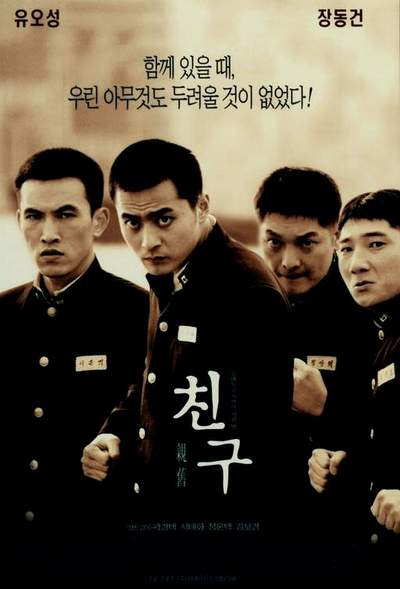 At a time when students had to fasten their collars and crease their slacks till they're razor sharp, these four friends strutted around in their own custom-fashioned uniforms. They walked the streets with their heads held high, shoulders straight, and chests out, fearing nothing when they were together. Joon-suk, a son of a vigilant gang boss; Dong-su, the only son of an undertaker; Sang-taek, a diligent student; Joong-ho, who never keeps his mouth shut. Those are the gang of friends who share their fantasies about naked woman on the porn magazine and their awe at Bruce Lee's Kungfu. Each of their lives takes different turns as they grow up and their paths cross in conflict with each other's. Joon-suk becomes the leading henchman of his father's crime ring and Dong-su is serving for Joon-suk's rival gangs. Sang-taek and Joong-ho find themselves helplessly watching their two best friends wield knives at each other... Indra Apr 17 2020 9:30 am Start exploring old movies cos of covid,try killing some time at home. This one on my playlist today.

Uee Oct 12 2014 9:50 am I gave this a try because it's a popular movie. In my opinion, this is a movie that would be awesome and beautiful... if you could sympathize with the leads. But they're literally the type of people you couldn't care less about, or worst, they're being a total pain to everyone around them. How can you be touched by them and their story? I was warned though, I know Koreans have a thing for insignificant lead characters, I won't waste time on their movies again.