Documentary of AKB48: To Be Continued 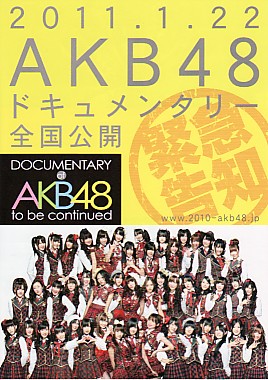 The idol group AKB48 continues to evolve, rewriting the record books. This documentary takes you behind the scenes of their success, and follows the young members as they pursue their dreams, experiencing both growth and anguish. The camera follows their concerts, and also focuses on the everyday lives of individual members as they experience joy, conflict, growth and the fulfillment of their dreams.

jonathan macam Jun 07 2012 5:43 pm Acchan (Atsuko Maeda),Mayuyu (Mayu Watanabe) and Yuki (Kashiwagi) are cute,Haruna (Kojima) is sexy,Yuko-san (Yuko Oshima) is the drama star,Sayaka (Akimoto) is proud Filipina,Sae (Miyazawa) is the power player,Mariko (Shinoda) is the star model, and many others who are worthy to be AKB48 members.